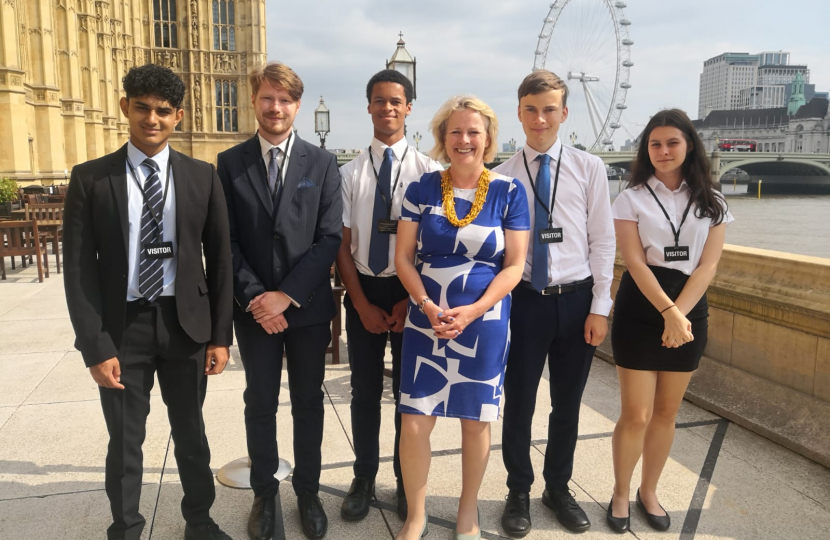 At the end of the summer Parliamentary term, I was joined by five young students from Chelmsford for work experience in Parliament. I took them on a tour of Parliament, explaining how legislation is debated and agreed.  We discussed how the House of Commons works with in conjunction with the House of Lords, and importantly how not to get lost in the huge building.

After Prime Ministers Questions, the work experience team joined me as I went to cast my final vote in the leadership ballot.  I introduced them to many MPs including the foreign secretary, Liz Truss.   I am backing Liz’s campaign to be party leader.   Having worked with her for the past 9 months I have seen first hand how she sets clear priorities, tackles tricky issues and delivers results.  It was a momentous day to be in Westminster. Three of the students were later interviewed by BBC Essex.  Speaking to the press and communicating back is an important part of MPs work.

Back in the Constituency, the work experience students had a tour and talks at the County Council to learn more about local government.  I took them through examples of case work, a hugely important part of any MP’s work and in the afternoon they join me delivering leaflets and chatting to residents.

If you know a sixth former in the constituency who would like to take part next summer, do ask them to drop me an email at vicky.ford.mp@parliament.uk.

Last month, I gave an update on the new bridge which will carry traffic across the rail line and dual carriageway onto what will become the new North East By-Pass. As part of the overall congestion reducing plans, I have been informed that advanced enabling works have just started on conveyor bridge, with main construction due to begin on 22nd August for a year. This will see the lorries able to access Bulls Lodge Quarry from the Boreham Interchange. The bridge will reduce congestion on White Hart Lane and reducing noise pollution on the eastern edge of Beaulieu.

Soon, I will be back in Beaulieu including meeting with New Hall School to discuss their suggestions for plans for a new primary school locally.

Recently I enjoyed a family holiday, it’s so good to be able to get away again. I very much hope that you are enjoying the summer.

As ever, if you require my assistance, please do get in touch with me by email on vicky.ford.mp@parliament.uk