Only Liz Truss can deliver from day one - Vicky Ford MP 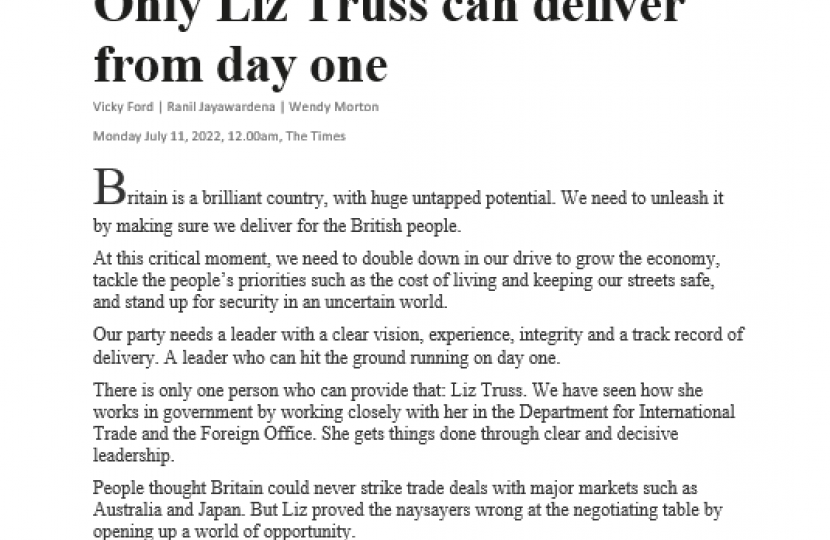 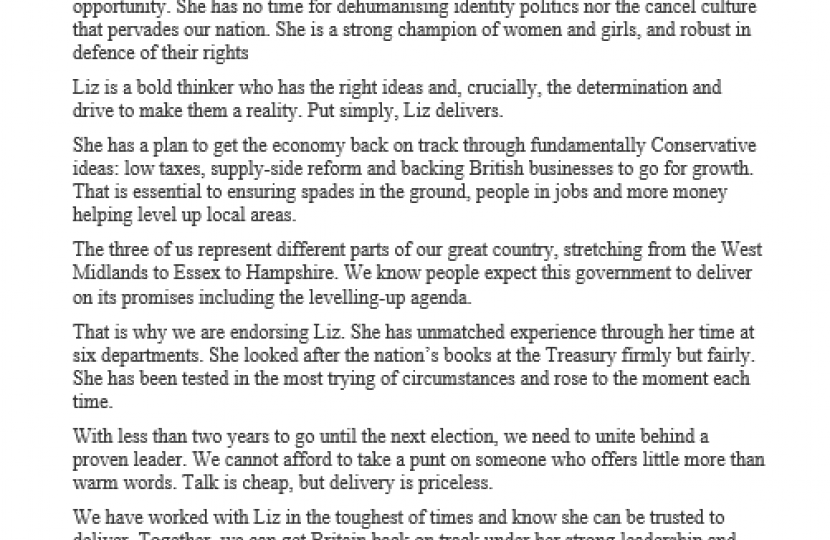 Only Liz Truss can deliver from day one

Britain is a brilliant country, with huge untapped potential. We need to unleash it by making sure we deliver for the British people.

At this critical moment, we need to double down in our drive to grow the economy, tackle the people’s priorities such as the cost of living and keeping our streets safe, and stand up for security in an uncertain world.

Our party needs a leader with a clear vision, experience, integrity and a track record of delivery. A leader who can hit the ground running on day one.

There is only one person who can provide that: Liz Truss. We have seen how she works in government by working closely with her in the Department for International Trade and the Foreign Office. She gets things done through clear and decisive leadership.

People thought Britain could never strike trade deals with major markets such as Australia and Japan. But Liz proved the naysayers wrong at the negotiating table by opening up a world of opportunity.

In the wake of President Putin’s invasion of Ukraine, Liz spearheaded efforts alongside our G7 partners in targeting Russia with the toughest package of sanctions.

Liz has pioneered a muscular foreign policy, demonstrated by the way she has gripped tough issues such as the Northern Ireland Protocol. She brought forward a genuinely workable solution to overcome the impasse. It protects the delicate balance of the Belfast (Good Friday) Agreement while fixing the real issues facing the people of Northern Ireland.

Whenever the eyes of the world have looked to Britain, Liz has delivered. She has worked alongside our friends to take decisive action, whether at the United Nations or in Glasgow for the Cop26 climate change summit.

Liz has a clear philosophy on the economy — and more broadly, for the country. Her approach is based on core Conservative principles: freedom, enterprise and equality of opportunity. She has no time for dehumanising identity politics nor the cancel culture that pervades our nation. She is a strong champion of women and girls, and robust in defence of their rights

Liz is a bold thinker who has the right ideas and, crucially, the determination and drive to make them a reality. Put simply, Liz delivers.

She has a plan to get the economy back on track through fundamentally Conservative ideas: low taxes, supply-side reform and backing British businesses to go for growth. That is essential to ensuring spades in the ground, people in jobs and more money helping level up local areas.

The three of us represent different parts of our great country, stretching from the West Midlands to Essex to Hampshire. We know people expect this government to deliver on its promises including the levelling-up agenda.

That is why we are endorsing Liz. She has unmatched experience through her time at six departments. She looked after the nation’s books at the Treasury firmly but fairly. She has been tested in the most trying of circumstances and rose to the moment each time.

With less than two years to go until the next election, we need to unite behind a proven leader. We cannot afford to take a punt on someone who offers little more than warm words. Talk is cheap, but delivery is priceless.

We have worked with Liz in the toughest of times and know she can be trusted to deliver. Together, we can get Britain back on track under her strong leadership and forge ahead to a brighter future.