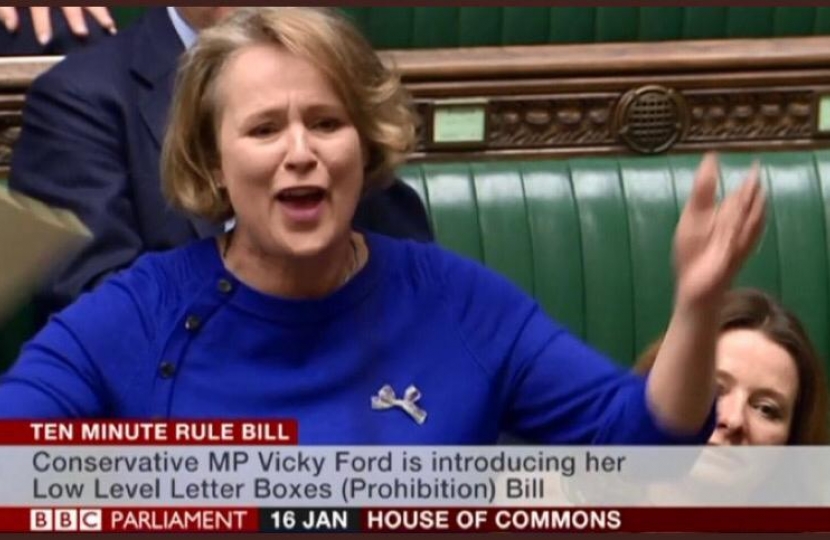 Vicky Ford MP has declared a victory for postal workers campaigning to prevent Low Level Letter Boxes. The issue rose to prominence in January when the Chelmsford MP presented a Ten Minute Rule Bill to a packed House of Commons just as politicians were preparing to debate a vote of no confidence in the Government.

The campaign to prevent Low Level Letter Boxes is a top priority of the Communications Workers Union. Supporters of the campaign want to see changes to Building Regulations so that the fitting of low boxes is prevented in new developments. Mrs Ford was inspired to take up the campaign when she met her own constituency post men and women in the run up to Christmas. They explained that bending or stooping to deliver to Low Level Letter Boxes puts repetitive stress on the deliverers back. Back injury is the primary cause of sickness in the Royal Mail which recorded over 16,800 back related absence spells last year.

Mrs Ford said “Sometimes in life little things make a big difference. Large developments with Low Level Letter Boxes are a nightmare for postal workers. Those of us who have ever suffered from back pain know how debilitating it can be. I am delighted to have been able to lead this campaign through Parliament and to have secured this result. The change in regulations which will bring about real improvements for the health and safety of postal workers and other deliverers. I would like to thank all those who have supported this campaign.”

Monday 19th October   Every week brings its challenges, but this has been the most challenging. It is a beautiful morning as I head towards Westminster with the trees full of autumn colour, but that is also a reminder though that winter is on its way and it is going to be tough for so many famili