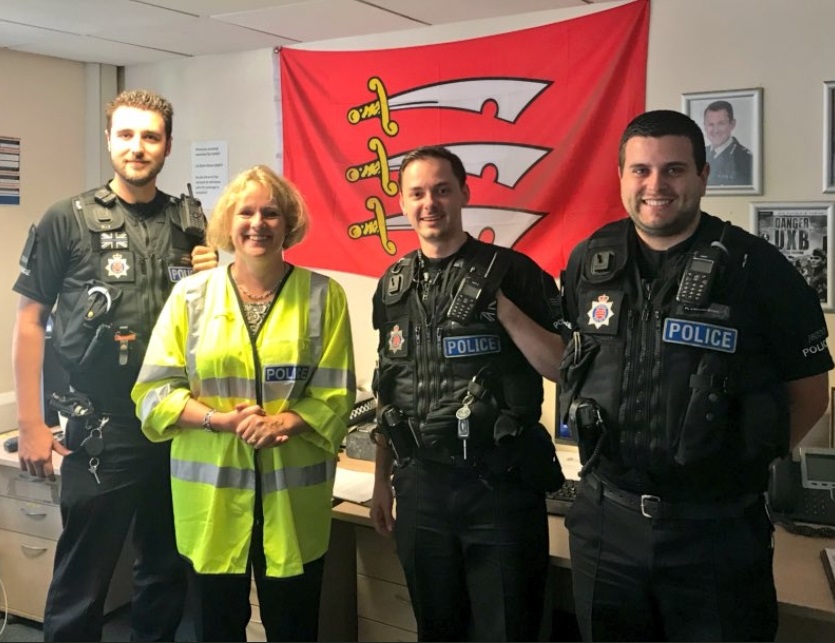 First week back from a summer holiday.  Parliament still on “recess” so time to focus on some issues.

Early train down to London to meet bosses of Greater Anglia.  I tell them how furious Chelmsford commuters have been recently, especially with all the cancelled and shortened trains during the hot weather and the chaotic night of complete train failure on August 6.  We discuss the need for a 15-minute Delay-Repay scheme and they update me on the work they have done to repair carriages.  Our new trains cannot come soon enough.  I write to the Transport Secretary urging him to take action on compensation.

Then to Cambridge to speak at a “Science Policy” course at the Wellcome Genome Campus.   I join local MP Heidi Allen and former MP for Oxford, Nicola Blackwood.  We discuss matters from Cancer research, to childhood obesity, e-cigarettes and climate change policy.  We agree how important it is that MPs look at research and evidence before making decisions.

Very busy constituency surgery, starting with residents from Great Baddow who are concerned about the Army and Navy flyover.  I agree that we need to find a long-term solution and share the letters that I have written to ministers.  I write again to the County Council and suggest that local councillor Dick Madden and I go to check on the work that has been done over the summer.  The residents promise to write to me with their questions and concerns so that I can make sure these are addressed.

What a day! I agreed to join Chelmsford local policing team as an observer – I join them at 10 am and am so impressed that I stay until 1am the following morning!    What a huge variety of work they have.  We rush with blue lights flashing, sirens blaring to an assault, a domestic violence case, a suspected burglary and an attempted suicide.  I join in to help a missing person search, the police team spot a known drug runner on his bike and give chase.  They pull over a driver for jumping a red light and then in Central Park they perform a stop and search resulting in cannabis seizure.  I meet six of the additional 150 new recruits who are going through their tutoring period.  Essex police are under huge pressure and these additional officers will make a great difference.  By the early hours of the morning I at Broomfield A&E where six officers are caring for individuals suffering from serious and violent mental health crises - all of which are related to drugs.

I end the day with a shopping list of things to do and actions to take, including campaigning for more CCTV cameras in Central Park, stronger sentencing from repeat offenders, and investigating the pressures on mental health beds.  I also have a list in my mind of ways that the public can help; DO stop and pull over when you hear a police car siren, please DON’T give money to people begging on the streets as it so often feeds the drugs cycle - give it to a charity that helps rough sleepers instead,  and please if you own a bike then DO take a photo of the serial number on the frame, there is a massive stack of unclaimed stolen bikes under Chelmsford police station, which can’t be returned because the owners can’t identify them.

Sleep in -  Then over to Sutherland Lodge to meet the head of Virgin Care.  It is good news that the latest visit from the independent CQC Inspectors found that the immediate and most pressing issues from the previous report are being addressed.   I meet new members of the local management team, they update me on plans to recruit more permanent staff, where they have also got some encouraging news and we discuss the improvements they have made to appointments booking and systems.  Meet their local management team.  There is still much to do.  I explain that I want to make sure that there is a long-term plan for improvement at the surgery.  For me, patient safety must be the number one priority.

I pop over to Moulsham Mill for a coffee (yummy) and to meet Michelle form the Chelmsford Community Radio team (very impressive).  I buy a pressie in the gift shop for my godson who’s done brilliantly in his GCSEs – phew!  It has been a particularly difficult year for GCSE with the changes in marking and exam structure.

Early start checking emails before hopping in the car.  It is my mum’s 81st birthday.  I’m keen to see her as she lives far away and once parliament meets again it will be hard to visit her.  My sister, niece and I take the afternoon off and take mum/granny to Mamma Mia 2.   I STRONGLY recommend this – what fun!