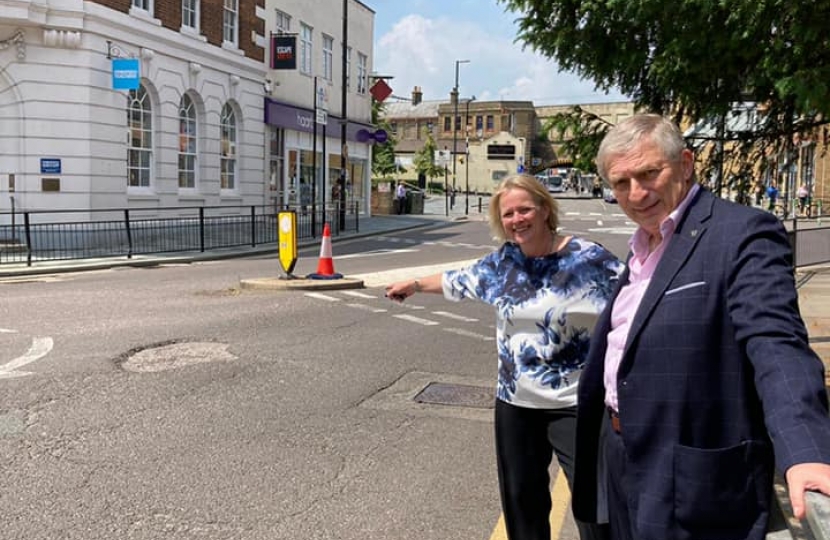 Monday 28th June  Every Minister has a small team of assistants who work in their “Private Office”. It is an incredibly busy job as they are responsible for coordinating all meetings, messages, and briefings. The Head of my Private Office is moving onto a new job this week, he has done an awesome job during this very difficult time and I am hugely grateful.

Back to back day in the Department of Education meeting the Chair of the “Safeguarding Panel” which reviews the serious incidents of harm or death of children, we discuss a major review they have been doing to reduce risk of harm to babies and very young children. I talk with The Youth Endowment Foundation about the research they have done into what interventions are most helpful in preventing older children and teenagers from being groomed into crime and danger and join the Early Intervention Foundation to hear about the benefits of getting early support to families. Henry Dimbleby, who chairs the Food Foundation tells me about their upcoming report into improving school food and tackling food poverty.

Tuesday 29th June  Up very early and into the House of Commons where I take the new Head of my Private Office and team to show them round. Due to the pandemic none of the team have been into the Commons and when Parliament opens up properly again it will be important that they know how to find the various committee and meeting rooms. It is rather like Hogwarts and easy to get lost!

I join a webinar launching the annual “Adoption Barometer”, this looks at pressures on the adoption system and makes recommendations for improvements. After a string of meetings with MPs across the country I settle down to watch England play football, great result!

Wednesday 30th June  Back into the House of Commons where the Education Secretary is being asked an Urgent Question about the number of children not attending school. With Covid cases on the rise there has been an increase in pupils and students needing to self isolate. Understandably parents and children are frustrated as it creates huge uncertainty. The Secretary of State is very clear, when we reach step four of the road map we must not be in a position that children and young people face more restrictions than others. Next up, Westminster Hall for a debate about educational support for children from disadvantaged backgrounds, there have been impressive improvements in recent years resulting in more and more young people from lower income families achieving better results and being accepted into university.

I join a meeting with local councils from all across the country to discuss care for unaccompanied asylum seeking children. Sadly, despite huge amounts of work to tackle people trafficking there has been an increase in the number of refugees travelling across the channel on small boats. Many of the children who arrive have faced huge trauma and we have improved the financial support that goes to councils when they look after them.

Thursday 1st July  Another early start heading off to Guildford to visit some schools. It is always incredibly helpful to get out of the office and listen to experience on the ground. From a quiet office in a family centre I log into a huge meeting with many of those getting ready to run our holiday activities and food scheme this summer, they are spending the day sharing ideas and helping each other. Then off to the excellent local maintained nursery school which has been doing fabulous work to support young children and their families, especially children with special educational needs. Just down the road I visit the outstanding Pond Meadow special school, they care for children with severe autism and multiple disabilities. I am deeply impressed by the interaction between staff and students and the calm, focused mission to help the young people develop independence.

Heading back towards Chelmsford I spend the early evening knocking on doors in Writtle, reminding people to vote in a by election for the city council. Its late when I get to Essex Cricket Ground, but enough time to see Dan Lawrence make a fifty and Essex take the match. We need to win all our remaining 20:20 matches in order to qualify for the later rounds – fingers crossed.

Friday 2nd July  My Chelmsford day starts with another school visit, this time to KEGS to meet the year 12 politics students. We have a great discussion on a huge range of issues from local to national to international, health, environment, transport and so much more. What an extremely thoughtful and perceptive group of students.

Online, I join the Army and Navy Taskforce, alternative plans for a new junction will be going to public consultation over the summer – it is so important to work to find the best solution. I pick Cllr Lee Scott up from County Hall, he is the lead member for Essex County Council on Highways and Maintenance, so I’ve asked him to come on a tour of Chelmsford’s potholes. We start outside the railway station where there is a huge hole at the roundabout, I talk him through the dangers of the holes on Pump Lane near the bridge and we join Cllr McQuiggan in Harrow Way, Great Baddow where the pavements badly need repair. I am frustrated to hear that Great Baddow and Galleywood Parish Council have not taken up the funds offered by the County Council that would enable them to make rapid improvements on projects in their areas.

After a BBC Essex interview where I ask residents to please support our local markets, I head over to Old Moulsham. Its very clear that the proposals to divide the area into four quarters has got many problems and I am hugely grateful to one of the local residents who takes me through this in great detail as well as giving many ideas for other improvements that could be made to reduce traffic, tackle speeding and make it safer for cyclists and pedestrians.