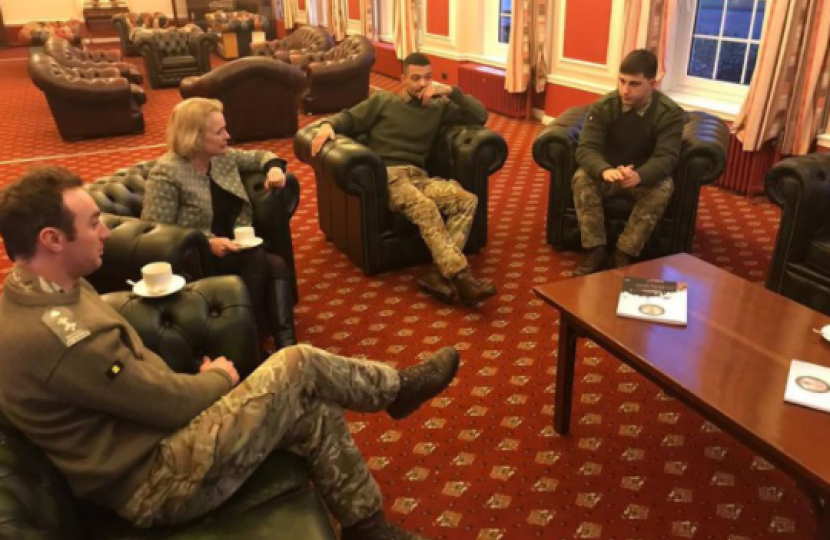 Monday 31st January  I am still not feeling great as I return to Westminster this week. The mystery tummy bug that I picked up in Africa has now been diagnosed as not just one but three different bugs. Antibiotics have kicked in but have also brought their own side effects.

In the Foreign Office I discuss a programme we will plan to set up in Nigeria to help farmers adapt to climate change and become more economically stable. Over 30,000 people were killed in Nigeria due to violence last year. It’s a large country and the reasons for the violence differ depending on the part of the country. In parts of the North there are Islamic terrorists but in the “Middle Belt” attacks tend to be intercommunal, including fights over land and grazing rights which can be exacerbated by poverty and related to climate change. Nigeria is a rapidly on its way to becoming one of the most populated countries in the world, many other parts of the country are vibrant and helping to stabilise it is very much in UK interests.

I join MPs in a packed House of Commons to hear the Prime Minister give his statement on the Sue Gray report. The report is brief with much of the content stripped out until the Met Police complete their own investigation. This is frustrating as I know many people (including myself) want clarity over exactly what happened.  However, the report clearly states that there were failures of leadership and judgment by different parts of No 10 and the Cabinet Office at different times. The Prime Minister makes an apology, says he plans to reform the No 10 workplace and takes questions for nearly two hours. The mood is extremely uncomfortable.

I head off for a call with the Head of the International Monetary Fund, discussing the very challenging economic situations and instability in other parts of the world, before returning to the Commons for a statement by the Foreign Secretary. The situation between Russia and Ukraine remains extremely tense, and the Foreign Secretary announces the strongest and most severe sanctions arrangements that the UK has ever introduced, to be used if Russia does invade.

Tuesday 1st February  Early start in the Foreign Office, briefing MPs about my recent trip to East Africa before a lengthy meeting with the Nigerian National Security Advisor who is in London for a series of meetings on security and defence cooperation. I meet the Home Office minister responsible for overseeing compensation to victims of the Windrush affair and hear how improvements have been brought into the system. The police call me to tell me about a domestic violence murder in Chelmsford. It is so very sad.

Wednesday 2nd February  I discuss our relationships with Latin American countries with the chair of the All Party Group. It is extremely interesting to hear that many investors from Latin America are choosing to invest in UK businesses and helping to create jobs here. I catch up with the Business and Energy Minister to discuss our Africa Strategy and meet online with the President of Malawi. Malawi is the fourth poorest country in the world. A terrible cyclone has just ripped through the country causing many people to lose their homes and destroying at least 40% of the electricity network.

Thursday 3rd February  Ofgem have just announced the new energy price cap and it is clear this will have a huge impact on many household bills. The government announce new support to help, including a £200 soothing rebate for all households and a £150 cash rebate on Council Tax for those in Council Tax bands A-D.  I am interested to know how many Chelmsford residents might be eligible for this and ask the House of Commons library if they can research this. They tell me that in Chelmsford 39,560 homes are band A-D and 9,710 are in band E-H.

I meet with the team working to help improve vaccination delivery in Africa and meet with our Ambassador in Somalia before heading over to the residence of the Brazilian Ambassador for a long and friendly meeting about trade, security and environmental issues.

I hop on a train to Peterborough and travel to the home of the Royal Anglian regiment. The regiment has just returned from a 6 month UN peace keeping mission in Mali and I am keen to hear from them first hand about their experience. It is a very unstable part of Africa, with much banditry. The conditions are also extremely challenging, with temperatures reaching the mid 50s on some days. Our brave troops tell me about the work they did to bring peace and calm to many remote villages. I ask them why they think the UK Army should support peacekeeping missions. “Everyone deserves to live in peace” says one soldier. How true.

Friday 4th February  My Chelmsford day starts with a busy constituency surgery, a meeting with a local shop keeper about recent break-ins and then an extremely helpful meeting with CHP. CHP is the largest social landlord in Chelmsford and, compared to others, is extremely helpful and thoughtful when residents raise issues with me. We discuss issues affecting tenants, including the cost of living and resolving neighbour on neighbour disputes. I hear how they managed to keep maintenance and repairs going during lockdowns and the challenge of rising costs of building materials. They also tell me how popular Chelmsford is for first time buyers looking for shared equity properties. It is good that more people are getting a foot on the property ladder.

The police call again to give me an update on the murder inquiry but also to tell me that a person has been arrested for the recent shop break-ins. That is at least some good news.

I meet with Chelmsford City Council and the Environment Agency to discuss flood alleviation measures in Chelmsford. I have been concerned that work on reducing flood risk has been stalled for many years, it is good that progress is now being made.