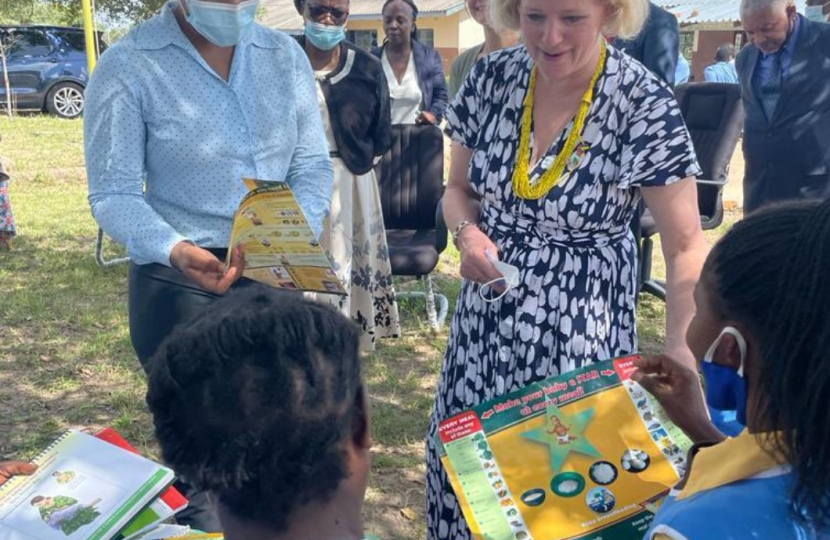 I am sure that readers will understand that since Russian invaded Ukraine, life has been very busy for UK Ministers in the Foreign, Commonwealth and Development Office.   The Russian action is a seismic shift in the geopolitical situation. Across the world countries have been trying to access what the consequences might mean for their own future.  What are the risks of contagion? of other conflicts escalating? and what will be the impact of higher fuel and food prices?  These questions, and the many votes at the United Nations, have sparked an eruption of diplomatic discussions.

The Foreign Secretary and the Minister for Europe have been leading the work with Ukraine itself and with other key partners in NATO, Europe and the G7.   As Minister for Africa, Latin America and the Caribbean I have been supporting the international response though many, many calls and discussions with other countries across the world.   Calls can be helpful but face to face discussions are also really important.

Of course, as a European country our focus has been to support Ukraine, but this does not mean we also must forget our friends and allies in other parts of the world.   International relationships are even more important now than before.

I travelled to visit Tanzania, Zambia and Malawi.   All three are Commonwealth members with long standing relationships with the UK.  They are all countries with a strong belief in democracy.  All three have had new Presidents in the past 8-24 months each of whom are determined to make a better future for their citizens.

All three countries have very high levels of poverty. Malawi is one of the five poorest countries in the world, it is heart-wrenching.   All these countries need investment to bring jobs and infrastructure. In Tanzania and Zambia I heard from UK owned businesses how the new leadership is helping to create a more stable environment.  This is already bringing new investments.  I encouraged the President of Malawi to keep up the work to tackle corruption as this will be vital to unlocking investment in that country.

Zambia has inherited huge and unstainable debts from the previous government and the UK has been supporting debt negotiations.  Unfortunately, one of the major creditor countries is taking a long time to respond, creating great uncertainty and holding back growth.  It was helpful to catch up with government ministers especially as I am due to attend the World Bank meetings in Washington soon.

Investing in education is also vital for economic development and girls often face extra barriers to attending school.  The UK is a leading country on supporting girls education across the world. I visited schools in all three countries to see UK led projects that are helping improve standards as well as encourage attendance.  In Tanzania I announced a new education project that will improve standards of education and in Malawi I attended a maths class where a new British led project is dramatically improving the way maths is taught.  Children sat on the floor, crammed into a “classroom” with no walls but they were loving the lesson.

Teenage pregnancy, child marriage and lack of access to sexual and reproductive health services is also a major issue.  Currently in Malawi nearly one in three girls becomes pregnant before their 15th birthday. I was told that only three percent of girls finish school.  The UK has set up a mentoring program so that young women who have finished school support girl learners.   Nearly a quarter of a million girls have been supported by this project and the government is now rolling this out nationwide.  I visited women’s health clinics in Tanzania and Malawi to see the work the UK has been doing to support access to family planning and health services.

These are incredibly beautiful countries and keen to increase tourism. This means protecting their wildlife.  In Zambia, the UK army been training park rangers on techniques to help them tackle poaching.  I met members of our army team at an elephant sanctuary which cares for baby elephants who have lost their mothers to poachers.   Female elephants only have a calf every five years so caring for each orphan is vital to protecting the species.  I heard how the handlers prepare the young elephants for release back into the wild.  They told me about a new twinning project they are setting up between UK schools and Zambian schools to encourage conservation.

Climate change is having a major impact with unpredictable rainfall and then drought.  A recent cyclone in Malawi took out one third of the country’s electricity supply when the rain caused the river which usually drives a major hydroelectric power station to entirely shift its course.  It will take many years to divert the river back.  At the schools in Zambia and Malawi I helped pupils plant trees.  They know how vital trees are to preventing climate change, but when people have very little to life off, burning trees is sometimes the only way to get the heat and energy they need. But protecting forests in this part of Africa is key to tackling climate change globally and to our future in the UK too.

All three countries signed up to the global pledge to tackle deforestation at the COP26 conference in Glasgow.   In Malawi I visited a UK funded business that is making bricks which do not need to be kiln fired, thus saving 14 trees each time a home is built. There I also saw Africa’s first 3D printed home.  This innovative technique not only saves costs and carbon but also makes stronger buildings, better resistant to storms and cyclones.

It was an intense visit, up at dawn each day with meetings and events until late into the evening.  I met kind, welcoming and committed people.  A British environmentalist who has lived in Tanzania for many years took me on a flight over a large wildlife conservation area.  He has been working with local people to agree a 40 year plan to protect their forest.  The project is backed by income from international Carbon Finance funding from global businesses under the rules agreed at COP26.  The trees that the local community protect are being monitored by satellite.  Local people are using the funds they receive to invest inn health clinics, schools and projects to support small businesses.   If this can happen at scale across these countries and further afield then there is hope for all our futures.