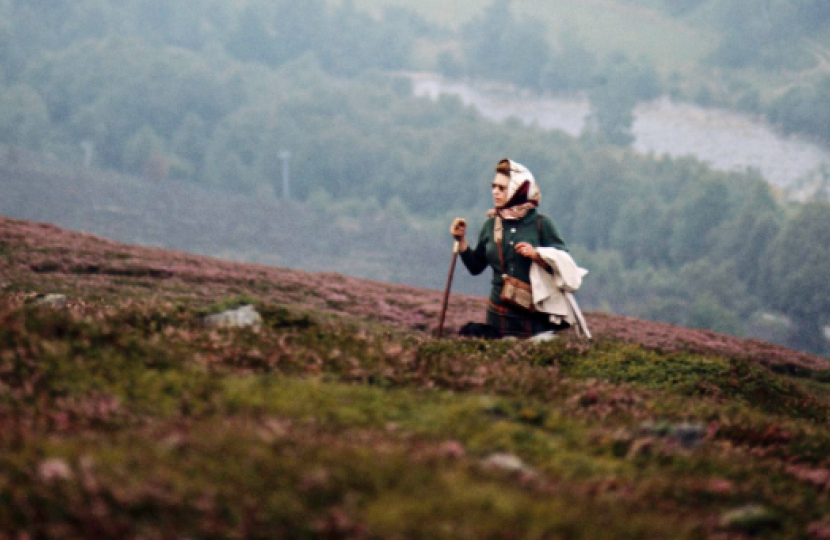 There have been so many words written about the past week, it feels impossible to add more of my own.

From early morning until late in the evening every pavement around Westminster has been deep with crowds.  Not a noisy, jostling crowd like those each of us will have experienced before, instead a quiet, reflective and sombre crowd.  Each time I have passed I have seen gentle gestures of kindness from stranger to stranger, giving support to others.   Police, St Johns Ambulance volunteers, as well as service men and women have flocked from across the country to help out.  They have been remarkable.  Full of calm and gentleness, looking out for members of the public in need and giving reassurance.

On Monday, His Majesty the King came to Parliament to receive addresses from both the Commons and the House of Lords. Overnight, 14,000 chairs had been placed under the Hammer Beam roof of Westminster Hall.  Two red thrones sat on the standing point halfway up the great staircase.  Those who have visited Westminster Hall will know this as the place where brass plaques rest on the floor, marking the locations where others have spoken before.  Five times, Her late Majesty the Queen addressed parliamentarians from these steps, Nelson Mandela, Barak Obama, Winston Churchill each also have their plaque.  It has been the country’s meeting place for over 900 years.  On this occasion, every person was dressed in black with just an occasional flash of purple from an Archbishop, reminding us of the church's role in our lives.  Thus began the week of mourning in the Palace of Westminster.

On Monday evening, as His Majesty’s Minister for Development, I left London arriving early in Nairobi on Tuesday for the inauguration of the new President of Kenya.  All overseas travel had been cancelled during the mourning period, but Kenya is an important sister country of the Commonwealth and the place where Her late Majesty first became Queen.  We felt that she would have liked to be represented at this important time to them.  At the inauguration, I received so many condolences from across the African country to share with the people of the UK, a firm reminder of how deeply loved she was across the world.

Before catching the last overnight flight home, I had a quiet cup of tea with the Archbishop of Kenya.  I learnt about the extraordinarily work that he and others have done behind the scenes over recent months to urge for calm during their recent election.   This has been extremely important as on previous recent occasions there has been much violence during election times in Kenya.  I realise that in the past week I have witnessed a peaceful transfer of power of a Prime Minister, a Monarch, and a President.

On Wednesday, Her Late Majesty’s coffin was brought to Westminster Hall for the Lying in State.   Staff gathered at every window in Whitehall, bowing their heads in silence as she passed by, overwhelmed with respect not just for our Late Queen but also for our new King and his family for the dignity that they are bringing to lay their mother to rest.

Late in the evening I joined mourners in Westminster Hall to pass by the catafalque on which her body was laid.   I cannot begin to describe the love, the faith, the emotions of this space.   As I turned and curtseyed, I was aware that the elderly veteran on my side, so strong with his beret and medals but with tears rolling down his face.  We held hands, face forward and walked through the remainder of the Hall hand in hand   Holding our tears together.

Every single part of the arrangements for the past 10 days and Her Late Majesty’s funeral were agreed and thought through by Her.   They have been thought out in such detail, by her, to make sure that as many members of the public as possible had their time to mourn, but also to make sure that the world had a chance to mourn.  During her life, Our Queen brought people together across this country and across the world.  She had set very clear plans, her wishes, for how this moment of grief would continue to bring people together.

Over this period so many people have worked to deliver those plans.    Over Saturday and Sunday, I, and other Ministers, have had the huge honour to greet leaders from across the world at Lancaster House, where they have come to sign the book of condolences after visiting the Lying in State.   This has been deeply emotional for many Heads of State from overseas. I have been struck by how own often I have been told that The Queen wrapped a loving arm around women leaders across the globe.  Many women have shared their own personal deep sense of loss and love.  Thank you, Her Majesty.

At Buckingham Palace, on the eve of the funeral, Her Late Majesty wanted to make sure that the UK’s and His Majesty’s love for people across the globe was shared in a coming together of leaders.  This was the world’s largest ever gathering of leaders and the world come together.

The world came together again at the funeral.  As Her coffin left the Abbey in that most beautiful of processions, Her Late Majesty had asked for the overseas visitors to be cared for.  To ensure that there was one last chance to make friendships between countries in the hour before they dispersed across the globe.    As Foreign Office Ministers it was so moving to be part of this.  Thank you to the team at Church House beside the Abbey for making this happen.

I want to give the biggest of thank yous to so many people across Chelmsford who have reached out this week and given their support and prayers.

Over the past days, I have constantly been reminded we are living at a turning point in history.  The world faces huge challenges.  I so much wish that the love, peace and kindness from across the country, the Commonwealth and the World that we have felt in the past 10 days will be bottled up and sustained.