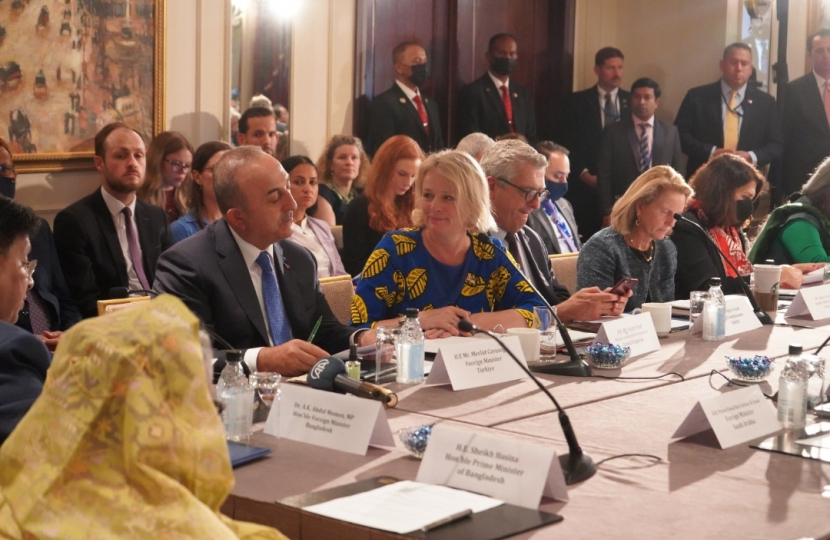 Although I have visited New York many times, including working there for a short period after university, I have never attended an UNGA meeting before.  It is always a busy city, but in UNGA week the busyness explodes.   Leaders and ministers from across the world come together, both to take part in formal meetings of the United Nations and for a multiplicity of side events that focus on the many different challenges the world faces.

The UK delegation included six government ministers, the Prime Minister, Foreign Secretary, COP President, two Foreign Office ministers from the House of Lords and myself.   We each had packed agendas, including speaking at formal events and bilateral meetings with other leaders, ministers and officials.

As Development Minister, I took part in a number of events highlighting issues affecting the world's poorest countries. So many parts of the world are being rocked by the effects of climate change, conflict and the aftermath of the Covid pandemic.  Already difficult situations have been exacerbated by Putin’s war in Ukraine which has pushed up costs of food, fuel and fertiliser. In many countries people are facing huge misery and the sustainable development goals which were set out internationally at the turn of the millennium are off track.

Fifty million people are now on the brink of famine across forty-six different countries.  The majority of the world’s children cannot read by the age of ten, rates of HIV have increased, one in twenty children still die from malaria. Cyclones, droughts and floods have wiped away years of work on health, infrastructure and education. Without support for developing countries, migratory pressures will increase which will continue to impact on us domestically.

It is often women and girls who bear the brunt of poverty, insecurity and instability.   Girls miss out on education, women face increased violence, young teenagers are forced into child marriage.   In many countries women are unable to access the basic right to sexual and reproductive health services, resulting in unwanted pregnancies and increased maternal death.

Yet, where girls can access education, where women are empowered, able to work and listened to, the chances of economic growth and stability for all can increase. The UK’s international development strategy has a clear focus on women and girls, so it was good to take part in several meetings to highlight the work we are doing overseas to support partners in some of the worlds most troubled countries on girls' education, health and empowerment.

I joined a session on the desperate situation in the Horn of Africa where rains have failed for the past four growing seasons.  Somalia in particular is very close to famine.  I was able to announce more funding for the humanitarian situation there but more donations from other counties are urgently needed.  I also met the Deputy Prime Minister of Ethiopia and urged them again to cease the terrible conflict in Tigray.   Another meeting focused on the situation in Bangladesh where 1 million Rohingya refugees from Myanmar are still unable to return to their homes five years after they fled.

In many meetings, I urged others not to step back from the climate change promises that countries made last November at COP26 in Glasgow.   The UK has been turbo charging our work to offer developing countries access to reliable financing for infrastructure and working to harness private sector investment from the City of London.

An environmental time bomb is ticking in the Gulf where the aged oil storage taker “SAFER” is in great danger of breaking apart.  If it does break up, this would be the world's worst ever oil spill.   The UN is working on a plan to remove the oil from the tanker.    I was able to assure others that our contribution to this plan is in place and encourage urgency to start the operations before the autumn weather window closes.

Learning the lessons from the Covid pandemic was also a major theme.  I met the head of the World Health Organisation and joined discussions on tackling Antimicrobial Resistance.  This is now the world's fifth largest killer, a silent pandemic that is affecting us in the UK as well as many others globally.  The UK has been at the forefront of calls for global action for many years.  Other bilateral meetings were with the head of UN Family Planning Agency, the UN lead on Humanitarian needs who has been at the forefront of brokering the deal to get grain out of Ukraine, and the deputy head of the United Nations.

Meanwhile back in the UK, ministers have been busy announcing new plans to support people with energy costs, improvements to the NHS and plans to help stimulate and grow our own economy.  A busy week.