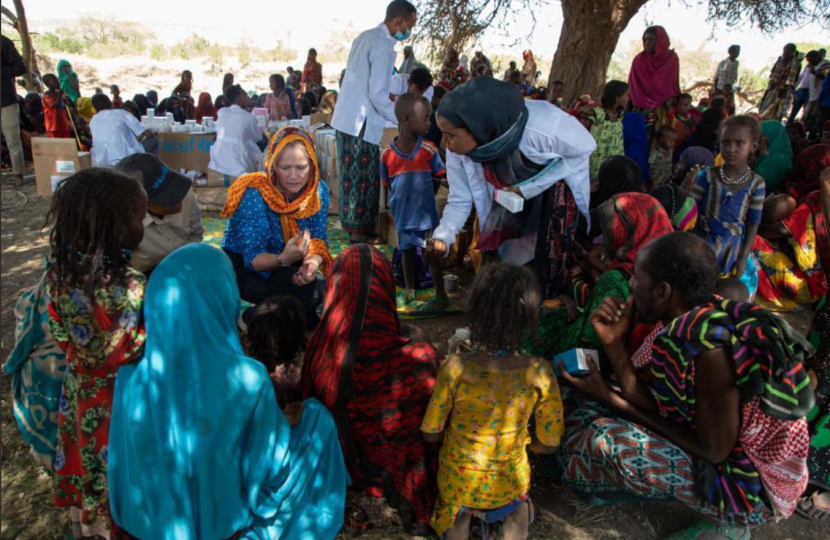 If someone kept a chart for the most turbulent week in Westminster, last week would be topping it.

I was in Westminster on Monday, listening to the new Chancellor make a sombre statement about the state of the economy and the need for restraint in public spending in order to control inflation.   it calmed the financial markets and appeared to also calm MPs in the Commons.    By Thursday evening, the Prime Minister had resigned, and we are back into a leadership election.

I know many people are worried about their own financial situation.  I am very grateful to all those constituents who have written to me with their views, thoughts and suggestions.  I hope that stability returns soon and will do all I can to try to achieve that.

We also know that we can’t have security at home whilst there is insecurity overseas.   Insecurity and instability also drive migration, which affects us locally.

During the week I travelled to Ethiopia, a country which is being ravaged by a war in the North and drought.  Peace talks may be about to start but there is concern that this could talk and not action.  I spent the first day in the capital, meeting leading members of the Government, urging them to take real steps to peace, declare an immediate ceasefire, let humanitarian flow and protect civilians.

In the neighbouring country of Eritrea, civilians are being forcibly conscripted into the military and sent to fight in the Ethiopian province of Tigray.   When this has happened in the past there has been mass rape of women, pillage and burning of crops.   I urged the Ethiopian ministers to tell the Eritrean forces to leave.

I travelled to Afar in north-eastern Ethiopia, a part of south and east Ethiopia, Somalia & Northern Kenya that has been decimated by climate change driven drought.  The rains have failed for the past four growing seasons.  I am finding it hard to process what I witnessed or the magnitude and speed at which this tragedy is unfolding.

We drove for two hours along a “dirt track” to reach an isolated community - but even that description is overly positive - if that was a “track” then an Essex country lane is a motorway.  There is nothing -no buildings, no communications.  The riverbed is dry.

Before the drought this land was teeming with cattle, goats, camels etc.  Pastoralists relied on their animals for food & income.  Now the land is brown & most of the animals have died.   All they have is a weekly visit from a mobile health unit held under the only large tree.

The health truck is managed by UNICEF, funded by UKAid.  Medical assistants give sachets to mothers of malnourished children.  Nearly every child I saw needed these sachets.

The tiny one-a-day treatments of fortified peanut paste can be life savers.  But only if there are no other complications - many also had coughs, probably pneumonia.

Mothers told me they know the life of pastoralists is no longer possible.  They want to find new livelihoods & new ways of living.  But whilst Afar has possibilities for new opportunities, this needs long term investment. It is challenging for the country to get this investment whilst civil war is raging in the next-door province of Tigray.

To unlock opportunities education is needed, but one in four children in Afar drop out of school before end of year one.  That’s of the children that even start school.   At a school near the main road, I met kids desperate to learn, but conflict and climate change means that many children become displaced when families are forced to move on.  UK Aid has been helping @UNICEF with accelerated learning for those who have missed out.  I also saw a clever, cheap solar powered radio which was being used to deliver tailored lessons.

Twenty-four million people are now directly affected by this drought in Ethiopia, three times more than six months ago.  The acceleration of the crisis was brought home when I visited the only hospital.   Many health facilities were destroyed when the conflict tipped into this region last year

In this drought, millions of people are hanging on to life by the finest of threads.  One more shock & many will die.

This year the UK will provide £156m of humanitarian aid to E Africa & more in development aid - but MUCH more is needed.

Other countries need to step up.  I hope my visit may go some way to shine a light on this forgotten crisis and help find solutions.