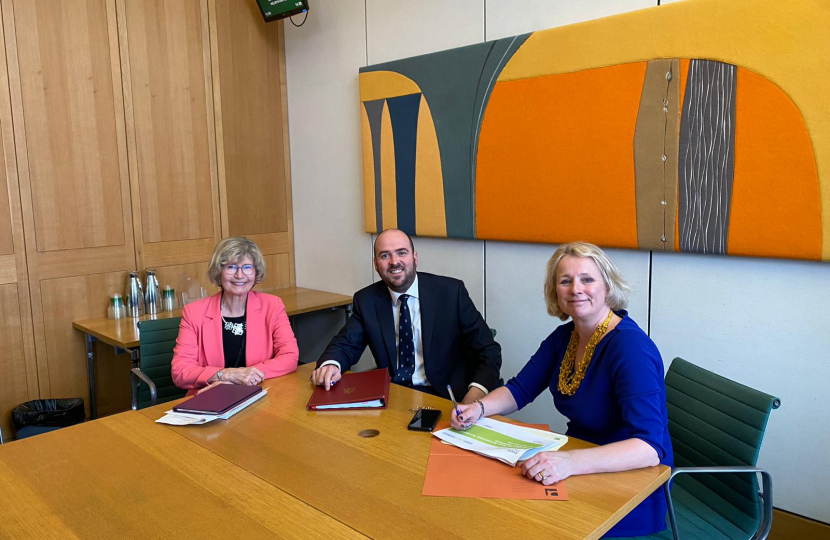 MPs returned to Westminster this week after the Christmas recess.  Like others across the country this was the first time colleagues had had the chance for a proper break since the beginning of the pandemic.  MPs were rested and relaxed but also aware that this may not last for long!

On Monday evening I joined a gathering of colleagues to meet with the Chancellor.  He set out his priorities to tackle inflation and focus on improving growth, whilst also keeping our national debt under control.  The global price for energy has reduced from its peak which is a positive sign, but the economic situation is still very challenging for countries across the world.

This week I convened a meeting in Westminster with the Essex County Council cabinet member for infrastructure, County Cllr Lesley Wagland and the roads minister Richard Holden MP to discuss the Army and Navy sustainable transport package.   It was a very positive meeting.

Alongside delivering Chelmsford’s new railway station, replacing the Army and Navy junction is one of my top priorities.   However, projects like this one take a frustratingly long time to deliver and are expensive. Since the flyover was closed and removed for safety reasons the task force that I set up has met many times.   Initial designs and engineering studies were prepared by Essex County Council working with the Department for Transport and looked at many different options.  A new flyover was ruled out as this would have created even more congestion and had a very high risk of accidents compared to other options.

A public consultation took place, over 5,000 local people took time to look at the plans.    As a result, the ”Hamburger” style junction was agreed as the preferred option.    The package also includes considerable improvements to park and ride facilities as well as bus, cycle and pedestrian routes.

The Outline Business Case was submitted to the Department for Transport last October.   The total cost of this package is estimated to be £80.1 million.   Essex County Council have offered to contribute £8.1 million and Chelmsford City Council have offered £4 million from developer contributions.   We are therefore asking the Government to contribute £66.8 million.    This is now with ministers for decision.   Given the large amount of money this will need to be assessed against other projects across the country.

During the meeting with the minister, I stressed the vital importance of this project to the people of Chelmsford and the wider Essex area.   The minister noted the high cost/benefit of the project, which at a ratio of 2.7x clearly shows that investing in this type of infrastructure will benefit economic growth.  He was also impressed by the work of Essex County Council and the strong local consensus support for this package.  I will continue to press for the new junction to be approved and then delivered as soon as possible, but it will take time.

MPs have also been focusing on amendments to the Online Safety Bill which are due to be debated next week.  I am concerned by how quickly and constantly vulnerable young adults and children are targeted with content glorifying self-harm and eating disorders on social media. Anorexia is the biggest killer of all mental illnesses.  The Bill is likely to introduce new protections to help tackle self-harm content. I have tabled amendments to signal that this should also cover eating disorders.  I also took part in a debate about spiking, joining other colleagues who want to see spiking made a specific and named offence in law.   We believe this will make it easier to collect data and will defer offenders.

There has been much discussion about the NHS which is under huge pressure given the aftermath of Covid and the very severe flu outbreak.  In particular, overcrowding at A&E departments can lead to long wait times for ambulances. The Health Secretary announced an additional £250 million to help.  I caught up with the head of Mid and South Essex Hospitals who explained that, at our local hospitals, the average time ambulances are waiting at A&E this week has been under 30 minutes, which is inline with targets.   This follows a series of measures, including increasing capacity at A&E departments (especially in Southend), an increase in community beds to improve hospital discharges and a “Hospital at Home” service.   This should help reduce ambulance wait times and is possible thanks to additional winter funding from the Government.

Internationally, there is very concerning news about women in Afghanistan.   The Taliban has ruled that women are no longer allowed to work for Non-Governmental Organisations, including the UK charities who help provide health and education.   Women in Afghanistan are only permitted to see female doctors and female health workers.  Most of the health workers are employed by NGOs, so this new ruling means most women will not have any access to health services.  This is devastating and if it continues it will result in many more women dying in childbirth.  I have co-ordinated a letter from Women MPs to the Development Minister to highlight the issue.