Monday   Parliament is still in recess but I have a very, very early start as I am invited to a breakfast at the London School of Economics.  The former head of the World Trade Organisation is in the UK discussing what next after Brexit.  I am interested to hear his views.  Round the table are former ministers, trade commissioners and even Nobel Prize winners.  Leaving the meeting I am comforted to know that they didn’t have any new questions, but concerned that there are still so many unknowns.  In Westminster two new interns have joined my team – I only have a small team so this will make a huge difference.   We spend the day explaining how the office works and looking at constituency issues.

Tuesday  First day back for the autumn term, it’s clear that tensions are already very high. The train is late.  I join colleagues in Westminster Hall for a debate on banking fraud, two of my Chelmsford Constituents are affected by this.   In the House of Commons Chamber the Brexit Secretary comes to give MPs an update, I ask questions about long term customs arrangements.  There is still a huge amount of details to be discussed but this is not unusual.

I meet the Transport Secretary.  We discuss the plans to introduce 15 minute delay repay for our train users.  It is really important to get this as it will help hold the operators to their timetable commitment.  I also update him on the Army and Navy situation.  Interesting meeting with the Conservative Young Women’s association.  They are looking at issues that affect younger generations of women and how to make sure their voices are heard in political decisions.   Very proud as the Chair of this national group is Chelmsford entrepreneur, Seena Shah.

Wednesday The Women and Equalities Select Committee meet to discuss our report on sexual harassment in public places.  I’m pleased that MPs agree to mention the “Purple Flag” scheme.  This appears to be working well in Chelmsford at keeping people safer at night and it could be good to have more of these schemes across the country. I meet with a group of KEGS students who were visiting parliament – if you are reading this and know of a school who might like to visit do please book now… once the refurbishment starts it will be very difficult for schools to visit. PMQs is very, very noisy, and is followed by a very moving moment watching 120 soldiers returning from action march into Parliament, with military band and all.  Call with Gerry Parker, Head of Chelmsford Police, about recent action to combat drugs and gangs, they have made a number of arrests recently (Great!).

Drop in to support World, End Homelessness Day campaign before heading over to Downing Street to support PM on her negotiations (the majority of MPs do think she should be given the flexibility to negotiate).  Back to Westminster to vote on Agriculture Bill – important to support British farming and the environment.  Late dinner with colleagues discussing internet companies, the need for fair tax for digital giants and action on fake news etc.

Thursday  Train late … Into House of Commons, this time the Transport Secretary is answering questions about trains.  I ask him about our delay repay compensation scheme.  I’m delighted to hear him say that he hopes and expects we will get the 15 minute scheme next year.  It is good to get this on the “Hansard” record as it means government ministers will need to take action.  Meet the Association of the British Pharmaceutical Industry to discuss medicines and Brexit, it is important that there is a long term cooperation on medicines.  Meet the Minister to discuss Offensive Weapons bill, speak to the Prison Minister.  Spend the evening at a beautiful charity fundraiser in Ingatestone Hall in aid of Kids Inspire.

Friday Early start on BBC Radio Essex discussing latest prison inspection.  Good to know that the inspectors recognise the progress being made, but much still to do.   Very helpful meeting at the City Council discussing housing, infrastructure and the work they have been doing to combat antisocial behaviour and crime.   Visit the nine new modular homes built by the Council, very moved by meeting one of the tenants who has benefitted.   It has taken a while to put these homes in place as the building project was much more complicated than initially thought but it’s clear that they will make a huge difference.  Great to award prizes to three of the council staff for exceptional work, especially to one of the staff for her work helping people sleeping rough.

Off to The Beaulieu Park School for the official opening.  Loved talking animals with the pupils, it’s clear that they love their new school.  One four year old gives me an entire run down on the solar system, from largest planet to most moons.  Very busy constituency surgery followed by a catch up with the team from the Job Centre Plus to discuss Universal Credit.  In Chelmsford, people who are currently using Universal Credit “Live” will be moved onto UC “Full Service” system in early December.  There will not be any changes to their benefits but they will be able to get much better support and advice through the new system. The new system is being rolled out very gradually to make sure that there are no hiccups and that everyone gets support. 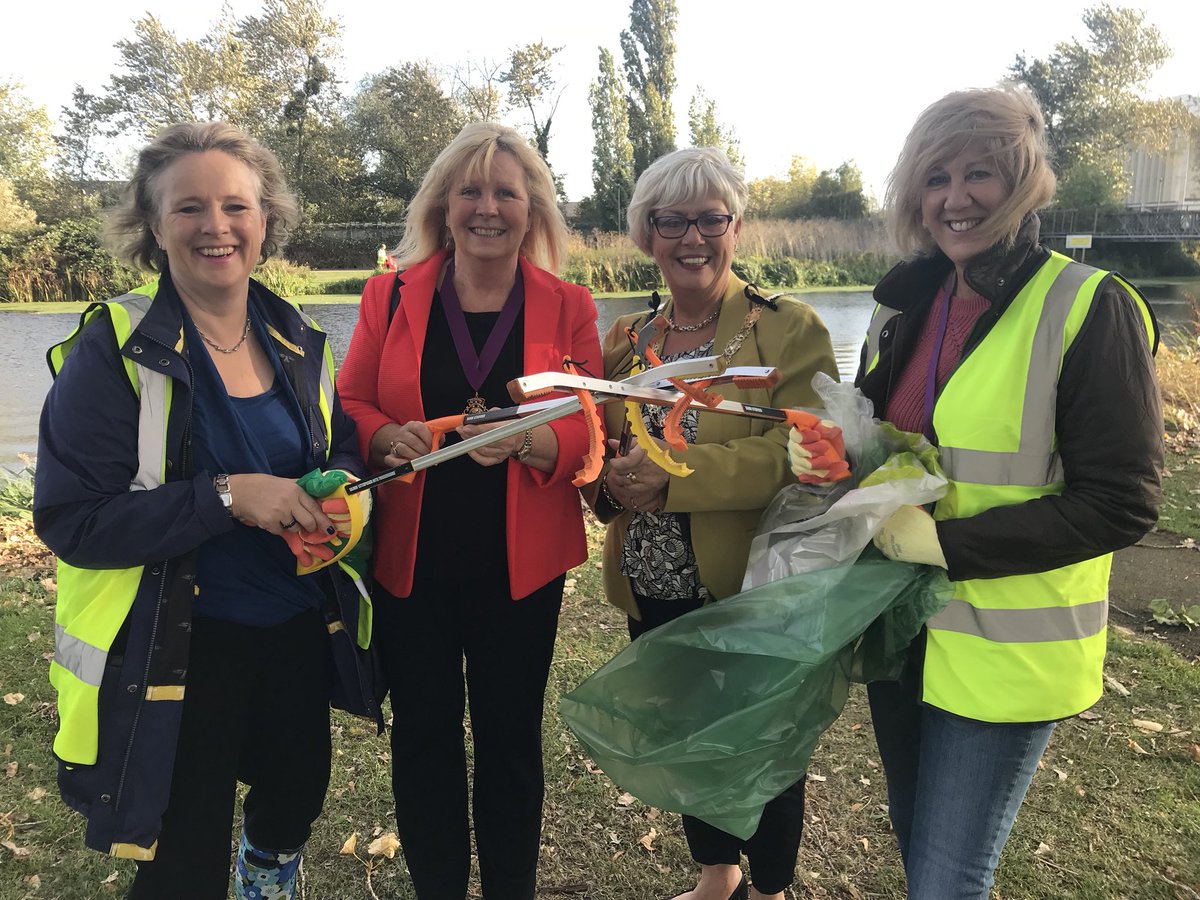 Saturday Beautiful morning helping the riverside litter pick.  The river and parks are looking stunning.  Do go and look at the knitted poppies that someone has used to decorate the riverside railings.