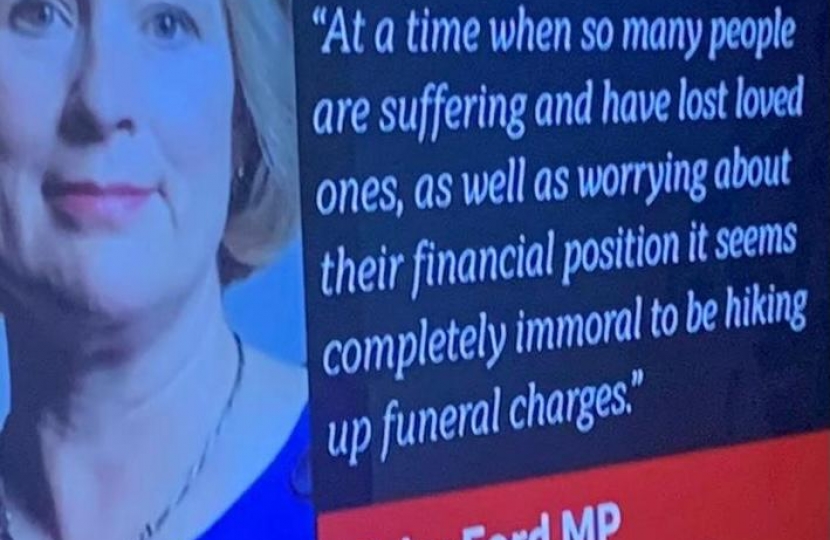 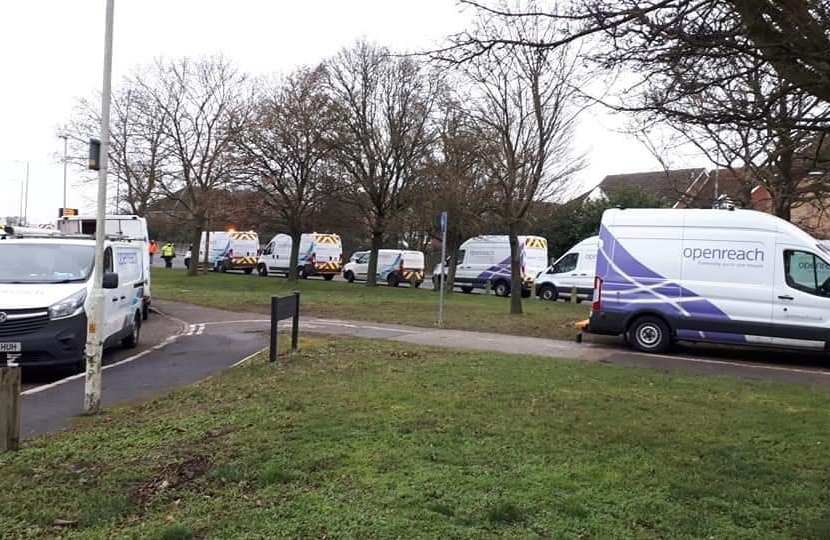 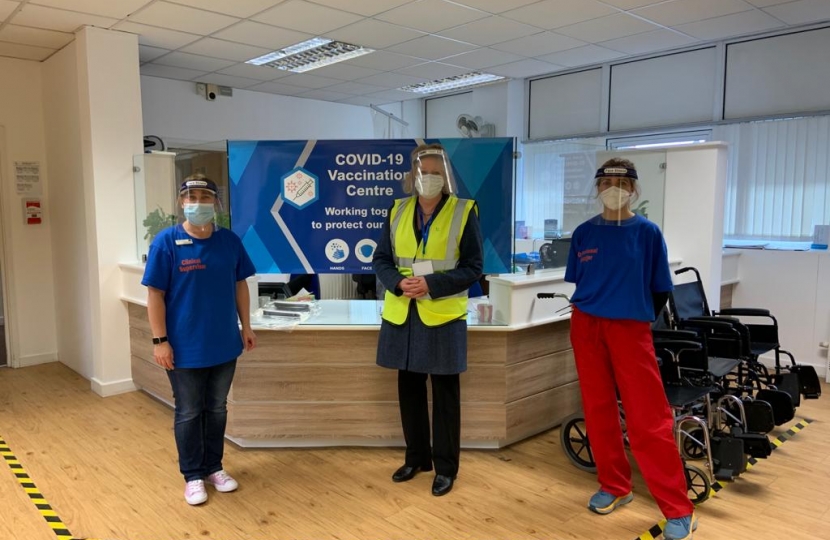 Monday 1st February  It's Children’s Mental Health Week and I have been thinking so much about the children and young people who are struggling with their wellbeing. There has been a rise in young people with eating disorders, and after much deliberation I have decided to speak about my own teenage experience of living through anorexia. I hope that by doing so it may give some others hope and encourage them to seek help. There is much more support available now than in the past, but it is sometimes hard to ask for help, or know where to find it. The Sunday Times have kindly published my own story and this signposts people to advice. My phone is buzzing with media requests.

An arsonist has destroyed one of the most important telecommunication cabinets in Chelmsford and 2,700 people have no internet. What a complete nightmare for them. I catch up with BT and Openreach who are working flat out to reconnect people and post updates on my Facebook so that people know what is happening.

Virtually catching up with officials at the Department for Education I have a long meeting with the team working on the review of Special Education Needs and Disabilities, a catch up with the Children’s Commission and an inspiring meeting with the Family Justice Young Peoples board. This is a group of young people from age 11 to early 20s who have experienced the justice system themselves. They are working to make sure that other children and young people are well supported by the courts and legal system.

I finish the working day with a long interview on Sky TV, talking about my own experience of eating disorders and explaining about the increasing support that is available for those suffering with mental health issues, especially the training and advice for schools, improvements in local services and new 24/7 crisis hotlines that have been set up across the country. At the DfE we have also published a lengthy update, signposting families and young people to advice on caring for one’s own well-being, this is so important this time.

By the evening I start to get good news of many households being re-connected to the internet. There have been dozens of engineers working on this.

Tuesday 2nd February  An early start with an interview for BBC Essex before heading off to a meeting on Mental Health with ministers from all across Government. It is uplifting to hear so much work is being done, with employers, sports organisations, job centres as well as the Department for Health. I meet with the Local Government Association to discuss improvements we can make to supporting unaccompanied asylum seeking children and start working on an intense series of briefing meetings before I have a hearing with the Select Committee next week.

In the evening I meet with women MPs. It is concerning that female politicians continue to be targeted by abuse both online and offline. This is a global concern but does appear to have risen during the pandemic. We have some great female MPs, but women in politics are still a minority so it is important to keep supporting each other.

Wednesday 3rd February  I catch up with the experts working on early speech and language development. This is so crucial to children’s development and over recent years there has been a huge improvement in identifying those who need support earlier so that they can catch up before they start school. I join a conference of the National Association of Virtual School Heads. They are an awesome group who work in each local area to support children in care with their educational outcomes. Since they were introduced the rates of school attendance for this group have risen significantly and rates of exclusion have dropped. This is making a huge difference to the future of these very vulnerable young people. I Zoom into another conference, this time with local leaders across London who have been working on improving children’s services before doing another TV interview, this time with Channel 4 news. I have been very moved by the number of people who have contacted me to thank me for speaking about my own experiences and explaining that it has helped them.

An update from Openreach lets me know that all except 20 households have now been reconnected to internet. If you are still struggling with your connection, please do contact your provider and they can accelerate the call into Openreach.

Thursday 4th February  Another busy day talking to interviewers about mental health and well-being, and a very helpful meeting with the eating disorders charity “Beat”. They are supporting many people at this time and the Government has also given them some extra funding during the pandemic.

I am concerned to hear that there is a proposal by Chelmsford City Council leadership to increase funeral charges by 12%. At a time when so many people are grieving for a loved one and when people are so concerned about their own finances, hiking up funeral charges seems to me to be immoral. I give a quote to the evening news who are going to be talking about this today.

Friday 5th February  My Chelmsford day starts with a meeting with the Vaccines Minister, it is great that over 10 million people have now had the vaccine. I catch up with the Essex County Councillor who is working on projects to deliver more electric vehicle charging across the county, and he also explains why it is difficult to replace some of the mature trees that have been needed to take down in Chelmsford. The problem is that to replace the tree in the same location requires removing old tree roots, which can cause huge disturbance to cables and services that have been laid under pavements over the years.

I arrange a Zoom meeting with local residents who are affected by the building cladding issue. It is so hard for them as they are so very concerned about fire safety and the costs of building works. The Government has been clear that leaseholders should not face unaffordable costs, and I am writing to the Housing Minister with the different questions raised by Chelmsford constituents. The residents are very helpful, going through the various issues that they would like me to raise.

The Essex MPs have a catchup call with our Police Chief Constable and the Police, Fire and Crime Commissioner, Roger Hirst. There is good news that crime is down across Essex and the levels of Covid are coming down gradually.

Saturday 6th February  A very uplifting morning at the vaccination centre at Whitley House Surgery. It is just awesome. Four local surgeries are working together, and they expect to vaccinate 1,000 people today. Before entering the surgery, I was given a lateral flow test to check that I did not have Covid. All volunteers and staff take this test before entering the surgery.

Patients are greeted outside the surgery where the kind volunteers check they don’t have symptoms and give them a personal piece of paper with their name and an individual QR code. They then queue socially distanced inside the surgery before being taken into one of the four vaccination rooms. Here a vaccinator checks they don’t have a history of allergies and explains the process before giving then the vaccine.

Their QR code is scanned and this enters their NHS number into the computer data base which is held centrally so there is a record of who has had which type of vaccine on which day - this will make giving second doses easier.

Vaccinators include GPs, Nurses and today one recently retired GP who has come back to help. Nearly everyone including the GPs is giving their time for free. Those patients who had had the jab told me that it had been completely painless, and they were full of smiles of hope.

I cannot say thank you enough to everyone who is helping to make this happen across Chelmsford.