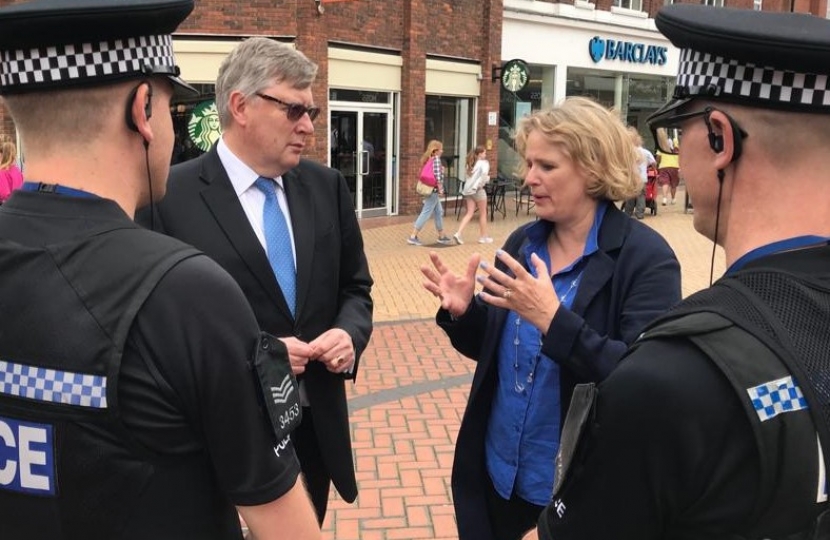 The Government announced (Autumn 2019) a further 20,000 police officers across the UK. In Essex we are receiving funding for an additional 135 officers in the first wave.   This is on top of the 368 increase in Essex Police officers over the past two years. September was a record month for new applications to join Essex Police.

A new local City Centre Policing Team is now active in Chelmsford prioritising knife crime, drugs and anti social behaviour. New Police Community Support Officers have been recruited in Chelmsford, especially in the City Centre.  A new Policing Hub has been opened which enables our police to work more closely with CCTV operations and other teams.

I meet regularly with our police officers and others working to reduce crime, including Neighbourhood Watch representatives across Chelmsford. I often raise their questions and suggestion with government ministers.

In Westminster we have been working to strengthen laws on carrying knives and other offensive weapons, to combat domestic violence and protect victims and to address on-line harms in order to make sure that people are as safe on line as they are in off line.   I have also supported the new laws against Upskirting and FGM in order to protect women. I have also campaigned for the Domestic Abuse Bill  which enhances protections for victims.

Recent announcements from the Government include new measures to tackle county lines drug gangs, to equip more officers with Tasers, and to strengthen sentencing for offenders.

On Friday 24th January, I had a very helpful catch up with our local police leads, especially regarding drugs, county line activity, speeding, burglaries and aggressive begging.

Last night, Vicky paid tribute in the House of Commons Emergency Debate to the teams of professionals involved with the Thurrock tragedy, many of whom are based in Chelmsford.

I have been campaigning for extra police in Chelmsford since day one as your MP and even before. Therefore, it was very good to be out on patrol with the new Chelmsford City Centre Police team and our Police Commissioner, Roger Hirst.

Today was Boris Johnson's first day as PM taking questions from MPs. Vicky told him about the 360 extra police Essex PCC Roger Hirst has added to the Essex Force, Vicky then asked the Prime Minister if Essex would get its fair share of the 20,000 additional Officers that he has promised.

Very good to have the excellent Police Minister Nick Hurd in Chelmsford today discussing the  Front Line Review which recommends more police officers and more support for them.

Congratulations to Chelmsford's Police Licensing Officer Nigel Dermott for his Chief Constable's Commendation award from BJ Harrington the Essex Police Chief.   Nigel has been the driving force behind the National Pubwatch scheme in Chelmford which helps to keep our pubs and clubs safe and drug f

Many people will be concerned about the news of a knife crime incident yesterday in Central Park. I share their concerns. I understand that the risk to the wider public from this incident is considered to be low.