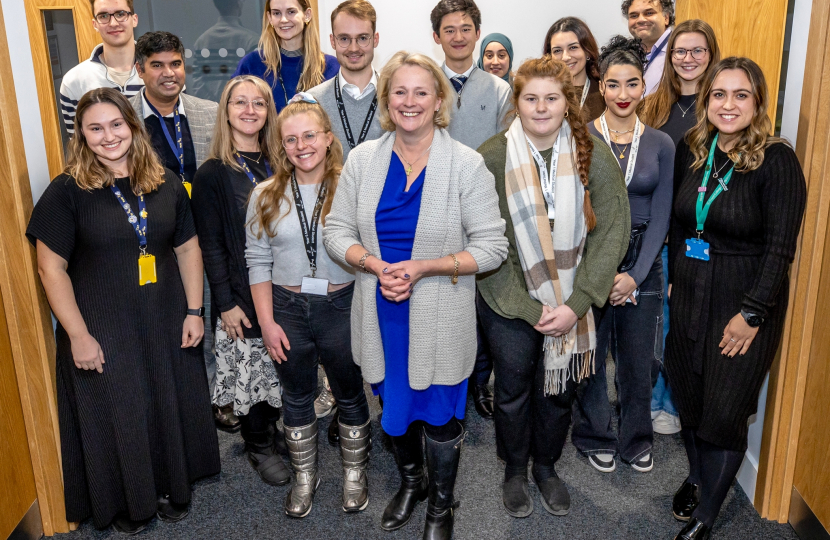 They say you wait ages for a London bus and then three arrive at once.   The week before Christmas brought three bits of very good news for Chelmsford.

I was over the moon to get the news that the contract for Beaulieu Park Station has been signed between Essex County Council, Network Rail and the construction company.   Local residents tell me that they were first promised a new station over 40 years ago.  Now it is firmly on track and construction will start in the coming weeks.  The new station will mean fewer people driving into central Chelmsford and will help to reduce congestion throughout central areas.

I have been working on delivering the station ever since I was first elected five years ago.  Unlike previous designs for the station, crucially the plans for Beaulieu Park Station will incorporate a “passing loop” so that fast trains will be able to overtake stopping services at Chelmsford.  This means the entire Great Eastern Main Line will be more resilient and more trains will be able to run to Colchester, Ipswich and Norwich as well as stations like Clacton and Braintree.   Hence it has been supported by MPs all across the East.

A second bit of good news was that St John Payne School is one of 239 schools to have been selected this week for the Governments School Rebuilding Programme.   This programme will rebuild or refurbish buildings at 400 primary, secondary and specialist schools. The work is expected to be completed in the next three to five years.    I popped into St John Payne School to meet with the sixth form politics students this week.  What a thoughtful bunch of young people.

I also visited the Medical School at Anglia Ruskin University to meet the medical students.  The first year of students are due to graduate next March and will be the first cohort of new doctors from any of the  new medical schools announced by the Government in 2017.    I was delighted to hear how much the students have enjoyed being based in Chelmsford and their placements in Broomfield, Basildon and Southend Hospitals.

Across the country the average attrition of rate of medical schools is around 8%, but only 3% of those who have started studying medicine in Chelmsford have left the course.   Many of the students told me that they would like to stay working in Essex when they qualify as doctors.  What excellent news for our local NHS.

Locally, I have continued to have a number of meetings to try to find a new host for the Post Office counter in Moulsham Lodge as the McColl’s branch is due to close in January.   If you know anyone who may be interested in hosting the post office please do contact me or local Councillor, Rob Gisby.

I have also been contacted by a number of Chelmsford residents who are very concerned about the planning application to convert the Back Inn Time property into residential flats.  This is a much loved and unique Chelmsford establishment and it would be a great shame to lose it.  I visited Back Inn Time to discuss the situation with staff and have asked for a meeting with the planning team at Chelmsford City Council to see what more can be done.

In Westminster, I called on the Foreign Secretary to proscribe the Russian Wagner Group as a terrorist organisation.   The Wagner Group of mercenaries has been implicated in many war crimes in Ukraine as well as many other countries, including a recent massacre in Mali.  I am told that if they are considered a terrorist organisation it may make it much harder for them to recruit.

MPs have also been voting on new changes to planning laws.  I am pleased that some of the amendments that I had supported have made it into the legislation, including proposals to make it easier to develop brownfield rather than greenfield land, give local authorities the powers to tackle land banking and enable the development of onshore wind farms where they have local support.

It was also an honour to meet His Majesty King Charles III when he visited Parliament in the middle of December.  The King unveiled a plaque to commemorate where Her Late Majesty, the Queen, lay in state in Westminster Hall.  He also unveiled two beautiful bronze statues which had been given by members of the House of Commons and House of Lords to Her Late Majesty to celebrate her Platinum Jubilee.