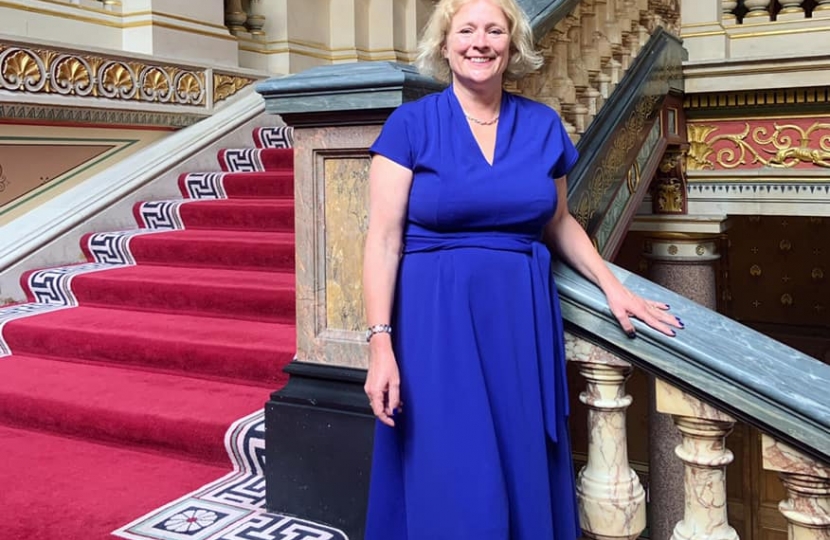 Monday 13th September  There are rumours of a reshuffle in the air, and uncertainty hangs over Westminster. In Westminster Hall, the second debating chamber of the House of Commons I am called to answer a debate about childcare. This is a thorny issue, and even though my children are now well beyond school age I still remember the juggle of work and childcare especially in their pre-school years. The quality of early years education has improved significantly over the past decade. As a result, the early education outcomes of our country’s children have also seen a big boost.

The Government invests over £3.5 billion every year in childcare, including paying for 30 hours each week for free early years education for 3 and 4 year olds of working parents. The free 15 hours of weekly childcare for 2 year olds from disadvantaged backgrounds helps to give them an early start to the language and communication skills that set them up for life. On a recent visit to Chelmsford’s Job Centre I was encouraged to hear that they are helping Universal Credit claimants to sign up for the Childcare cost element which can cover up to 85% of the cost of childcare for these families. The Tax Free Childcare offer can also cover 20% of the costs for working parents. Do make sure that if you have children that you check out all the support that is available.

In the Commons Chamber the Health Secretary lays out the new Covid plans including announcing the roll out of booster vaccines for certain groups over 50.

We have late votes on a new Constitutional Bill. This will end the Fixed Term Parliament Act which caused such chaos in the last Parliament when MPs were in endless deadlock over Brexit, and yet unable to call an election. I delighted to see this change.

Tuesday 14th September  A busy and long day as the Health and Social Care Bill is to go through all its stages in the Commons on one day. This is unusual, but it is very important to get the extra funding to the NHS to help reduce the Covid waiting lists and to start the vital reforms to social care. In the Department for Education, I catch up with Josh McAllister who is leading the review into children’s social care.

In the afternoon I hear that Essex’s mental health organisation EPUT have been required to take special measures for two of their children and young people’s wards following a poor inspection. The Head of EPUT tells us what measures they have put in place to improve staffing, training and support.

Wednesday 15th September  The Children’s Commissioner has just completed the most massive survey of children and young people ever undertaken in the UK and comes to tell us the headlines. It is uplifting to hear how many of our children describe themselves as happy, focused on supporting their communities and on wanting to see the world a better place for all.

I head over to Parliament for PMQs and then the reshuffle starts. All across the parliamentary estate MPs are waiting to hear news. The Cabinet ministers are announced first, we have a new Foreign Secretary and a new Education Secretary.

Thursday 16th September  Overnight I hear that the Schools Minister has also left Government, and as junior minister roles have not yet been agreed I am asked to take his place in a Parliament debate on children and young people excluded from school. I head into the Department for Education and work with officials to prepare my speech. When young people are excluded from school they can become more vulnerable to being drawn into gangs and crime, as well as dropping out of education, training and employment.

We have done a huge amount to put extra support into those children at risk of exclusion, including increasing support for children in care, improving Ofsted inspections to stop “off-rolling” and new task forces to increase support in mainstream schools. For those who have been excluded we are improving the Alternative Provision, bringing youth workers, mental health and Special Educational Needs experts into their education setting and bespoke mentoring for the young people as they pass from year 11 into college or work which is historically when many of these young people drop out of education or employment. This has been a huge part of my focus over the past 18 months as Children’s Minister and I am pleased to have the chance to be able speak about it on the parliamentary record.

During the debate I also receive a message to expect a call from the Prime Minister this evening. I rush onto the train to Chelmsford, worrying about the phone signal on the train! I am back at home when the phone call comes. The Prime Minister asks me to take on a new role at the Foreign, Commonwealth and Development Office as Minister for Africa. What a great honour to represent our country. I learnt a huge amount during my time as Parliamentary Private Secretary to both the Foreign and Commonwealth Office and the Department for International Development but am aware that I am going to be on a steep learning curve to do this new job well.

Friday 17th September  I quickly rearrange my diary and with deep apologies I reshuffle some of my Chelmsford appointments, after visiting one of Chelmsford’s school and a vital meeting with Chelmsford City Council and the Environment Agency about Chelmsford’s flood defences I head into Westminster again.

I spend the afternoon listening to and learning briefings from some of the excellent officials we have in the FCDO and across the continent. The new Foreign Secretary, Liz Truss calls together the ministerial team for a first meeting. It is late when I get home with a stuffed red box and piles of reading material to keep me busy for the weekend. Exciting times ahead.