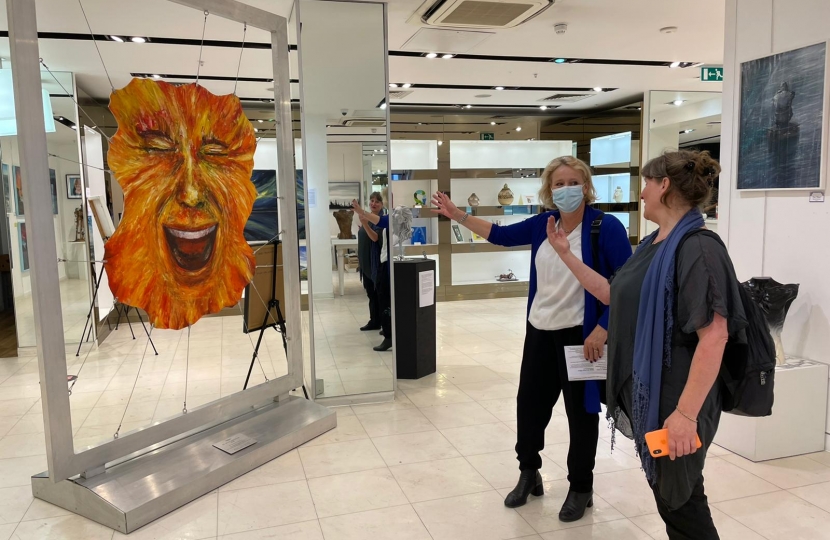 Monday 20th September  It is my first full day as Minister for Africa in the Foreign, Commonwealth and Development Office. I head into London hugely excited by the packed day of briefings ahead – only to be hit by a curved ball.

I have no sooner arrived in Westminster than my phone pings telling me that I have been in contact with someone who has tested positive for Covid and recommending that I get a PCR test immediately. I quickly book myself into the nearest walk in test centre and put my trainers on for a long walk over the river to Vauxhall. The test is extremely quick and efficient, and as I have been double jabbed I don’t need to self-isolate unless I start to have symptoms (which I don’t) or receive a positive test result. Never-the-less, just to be on the safe side we move some of my briefings to be online and keep social distancing in the office.

In the evening, I join MPs in the House of Commons where they have been debating this year’s pension levels. Usually, we have a triple lock that makes sure pension increases are in line with inflation, earnings or 2.5%. However last year due to Covid there was an unprecedented drop in earnings. Therefore, to stop pensions being frozen the Government changed the law for one year to set aside the earnings link. This meant pensions rose last year by 2.5%, which was higher than the then inflation rate of 0.5%.

This year, millions of people have moved off furlough and back into work. There is a huge a surge in the labour market and an unprecedented rise in earnings of 8.3% is predicted. As this is another Covid related distortion the proposal is that pensions again increase by 2.5% this year, and the triple-lock policy will come back as per normal from next year.

Tuesday 21st September  It is my birthday and the late autumn sun is shining as I walk into work. In the Foreign Office I have my first face to face meeting with a High Commissioner from one of the African nations and meet a group of Chevening Scholars from South Africa, Lesotho and Eswatini.

The Chevening Scholarship enables brilliant students, who are often future leaders, from many countries across the globe to come to UK universities to study master’s degrees. At the end of their year in Britain, they return to their own nations not only with new qualifications but with new skills and network to help them create a better future. It’s a delight to meet the students, learn about the huge array of subjects they have been studying and hear about their plans for the future.

In the House of Commons ministers have brought an emergency injunction which will allow the police to remand repeat offenders into custody for longer. This is to take action against those who campaigners who have brought large sections of the M25 to a standstill.

After evening votes, I am joined on the terrace of the House of Commons by a group of my women MP friends for a birthday drink. Women MPs are still in a minority and often face harassment and abuse that our male colleagues do not get. However, they are a fabulous group of friendship and support for each other. Its lovely to be able to relax and share stories together.

Wednesday 22nd September  There has been an attempted coup in Sudan. Its an important country to the UK and on a transition to democracy. On a call with the Prime Minister, I express the UK’s strong support for the civilian led government and condemn the attempted coup.

The Ethiopian Ambassador arrives for a meeting. The humanitarian situation in Tigray is dreadful. I set out the urgent need for the Ethiopian government to urgently improve humanitarian access to the area to prevent thousands of deaths. Fighting has been going on for 10 months. It is clear that there is no military solution to the conflict. All sides need to end their military campaigns and come to the table and talk.

I catch up with officials who have been working on helping to get vaccines to countries across Africa. The UK is one of the leading donors to the COVAX programme which has delivered 63 million doses to 43 African countries. We have also donated another 6.2 million doses so far.

Thursday 23rd September  I have invited the High Commissioners and Ambassadors from African countries to an online meeting, and it is incredibly good to meet so many of them. I know I have a huge amount of learning and listening to do.

During the meeting I discuss some of my priorities, especially the plan for the global climate conference COP26 which we are hosting in Glasgow in just 6 weeks. I talk about plans to help economies recover from Covid and increase trade and the UK’s commitment to human rights and democracy. The UK is the world’s leading supporter of improved education for girls, this is such an important part of making sure that women have the same rights and opportunities as men. We also discuss the importance of opening up travel post Covid.

In the House of Commons, I speak for the Government in a debate about the Persecution of Christians in Central Africa. Violence against a person because of their religion or belief is never acceptable. We are committed to freedom of religion or belief.

Friday 24th September  My Chelmsford day starts with a busy constituency surgery followed by a visit to the Ideas Hub.

I am continually inspired by the work that the Ideas Hub is doing in Chelmsford to support arts and culture. Not only is their shared workshop in the Meadows shopping centre buzzing but they have also put in a pop-up art gallery in the old Topshop in High Chelmer. The Gallery is full of beautiful paintings and sculptures, do stop my for a visit if you are in the City Centre. The Ideas Hub is also doing fantastic community work for children and young people and many others who are struggling with mental health or loneliness. They would love to have a permanent home so if you know any wonderful philanthropists who would like to support arts and culture in Chelmsford please do let me know.

An afternoon meeting with residents affected by cladding is complex. Especially as each affected property has different issues. I promise to raise the residents concerns and will keep the pressure on to find a resolution.

The week finishes with a wonderful time at Chelmsford Civic Theatre. CAODS, the amateur dramatics group are back on the stage and I am whisked away in an evening of music, drama and dance. Thank you Sweet Charity!