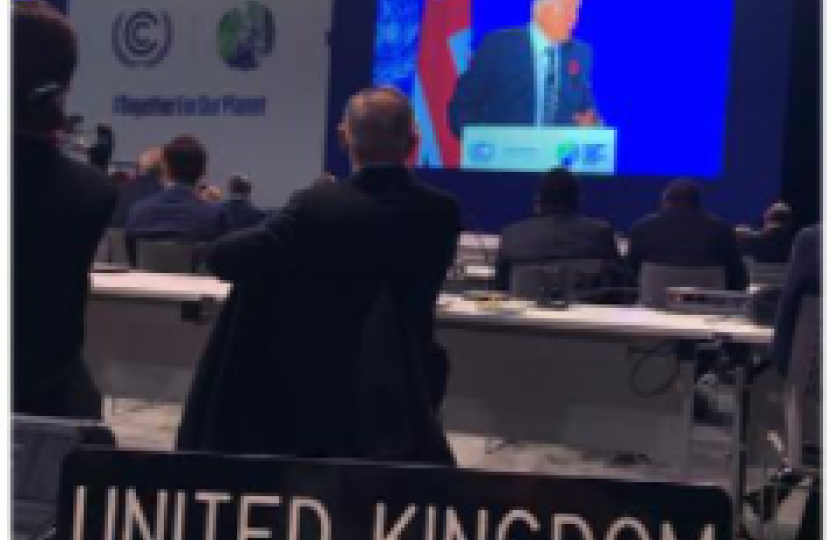 Monday 1st November  I’m in Glasgow for the COP26 Climate Conference, the biggest international event that the UK has ever hosted. As Foreign Office ministers our role is to ensure that all 120 world leaders are made welcome, and that we take the chance to discuss common issues as well as encourage their climate commitments.

A “VVIP” lounge has been erected over the weekend. It is a huge space, like the biggest airline lounge ever seen, a place where the leaders and their teams can meet. The first guests start to arrive at about 8.30, but by 10.30 the room is really buzzing, many leaders have not had a chance to meet others during the pandemic and they have much to discuss. Despite their long journeys and the challenging negotiations ahead, every leader seems to be smiling as they enter. The handshake they have had from the Prime Minister on the way in has set a positive mood.

At the opening ceremony I am hugely honoured to sit in the UK’s seat in the plenary hall listening to Sir David Attenborough urging all those present to cut carbon emissions one step at a time.

My afternoon is spent rushing between meetings with many different leaders. The first big announcement of the conference will be a promise to tackle de-forestation, so we are pressing those who have not yet signed up. By the end of the day, I have met all bar two of the African leaders attending and over 100 countries have signed the pledge for forests. It’s a great start.

Tuesday 2nd November  Today at COP the focus is on Africa where climate change is resulting in droughts and floods, land loss and famine. In many countries this is leading to forced migration, violence and instability.

A huge new deal is announced to help South Africa transform its electricity network from brown coal towards renewable power. This is a landmark agreement and especially important as the South African power system is currently the most carbon emitting in the world. It is also the first big sign that more developed countries are ready to help those less well off in adapting to climate change.

Another deal is announced to help protect the Congo Basin. It is home to the second largest tropical rain forest in the world and the planets largest carbon sink.

In bilateral meetings, as well as discussing climate issues, vaccine support, economic growth and many other issues I also discuss the very challenging and fast-moving situation in Ethiopia. Violence there is increasing, many millions of people are facing starvation as aid has been blocked. Neighbouring countries are concerned about the risk of the fighting spreading, creating even more instability.

Wednesday 3rd November  I arrive back in London via the Sleeper Train (yes, it was a train … but a sleeper???). In the House of Commons there is a debate on the humanitarian situation in Ethiopia and Sudan. I need to respond on behalf of the Government. Before the debate I speak again with our embassy in Addis Ababa. The UK encouraging warring parties to step back and cease fire.

As a member of the UN Security Council our UK voice matters in helping to bring together international pressure, we are also one of the largest donors of humanitarian aid. When the time comes for me to speak, I try to deliver the message firmly and clearly, urging all parties to stop fighting, and calling on them not to let the violence move into the capital city.

We have a challenging vote on parliamentary standards. I do believe that all elected representatives should follow the highest standards. However, there are also problems with an investigation system that does not allow those accused to have a chance to explain themselves or a right of appeal, this would never happen in any other job.

The evening brings a dinner with the President of Zambia and with UK businesses who are considering investing in his country. He is a most inspiring man. As opposition leader was jailed many times by his predecessor when he spoke out about the need to end corruption. Despite this he kept going and was elected this summer with a large majority and truly peaceful hand over of power. He is driving through deep reforms and working to put his country on a sounder economic footing.

Checking my emails I realise that there is a growing problem with postal services in Chelmsford. I speak to the Minister who puts me in touch with Royal Mail head office. I ask for an explanation and what they are going to do to resolve the backlog.

I join the Zambian Foreign Minister to sign a “Green Growth” pledge which plans to increase trade and investment between our countries, creating jobs in both countries. In the City of London, I help to open the World Bank’s new offices for the International Finance Corporation, an organisation that helps to mobilise private investment into developing countries.

Passing through the House of Commons I hear that Owen Patterson has now resigned as an MP. I hope that in coming months there will be the chance for cross party agreement on how to reform the standards system. Its early evening when I join a reception for the President of Namibia, they are leading by example on climate change and have exciting plans to produce green hydrogen.

Friday 5th November  My Chelmsford day starts off with a catch up from Royal Mail. They have had to change delivery routes in Chelmsford due to many more parcels being posted than in the past, this change over has been coupled with many staff being off sick and hence the problems with the service. They tell me they are recruiting extra staff and working to resolve this.

I join a big zoom meeting with representatives of Chelmsford Voluntary Sector and our local health service. In the High Street I meet the Head of One Chelmsford, the organisation that brings together businesses around the city centre. We discuss how the shops, clubs and bars are faring, catch up with market traders and I pick up a scrummy bagel from the new Brick Lane bagel bar in the Meadows. I speak with the owner of the wonderful fruit and veg stall that is usually on Chelmsford High Street on Friday and Saturday. He is worried as the Friday footfall is still not back to pre-covid levels and he has decided not to trade this Friday. Please do support his stall as it is a treasure of our city centre.

At the fire station I meet up with our new Chief Fire Officer and the Police Fire and Crime Commissioner, Roger Hirst. Chelmsford’s fire crew is also responsible for the large animal rescue service in Essex. They get called out to over 100 incidents each year often involving trapped horses or livestock. The fire officers give us a demonstration of how they use their specialist rig, harness and winches to rescue a horse that has fallen.

In Melbourne, I pop into the pharmacy where they have been doing regular walk in clinics for booster vaccines. It is great to have a quick chat with the team and thank them for all they are doing.

A sombre meeting about MPs security. After the dreadful death of Sir David Amess, it is an issue that weighs on the mind. An update from Royal Mail tells me that they are going to be delivering post this Sunday as well as Saturday to try to catch up on missed deliveries.