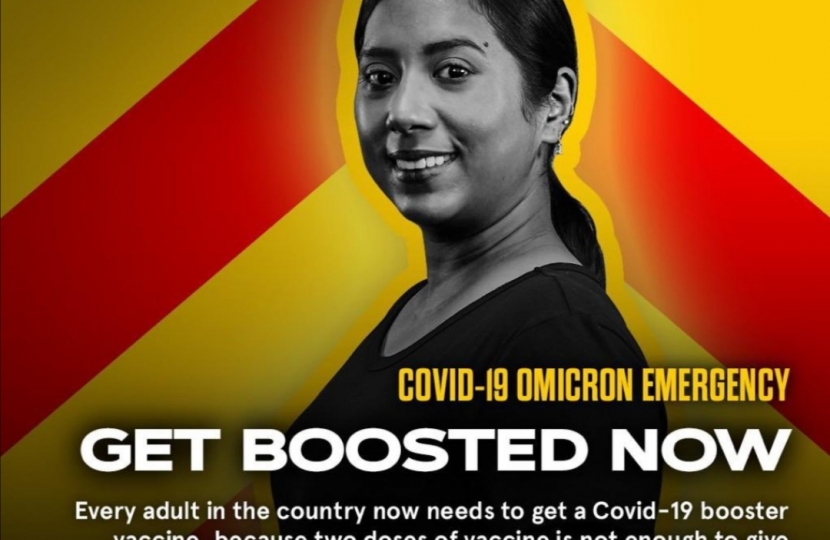 Monday 6th December  A busy day in the Foreign Office, with many African Countries now on the travel red list due to the new Omicron variant I have postponed my travel for this week. I spend the day on calls with ministers from other governments.

The red listing is causing huge disruption to people and businesses, which is affecting trade and travel. I explain to the Foreign Minister of Nigeria that we did not want to have to restart red listing but have done it to try to slow the spread of new Omicron cases coming into the UK whilst we ramp up the delivery of booster jabs across the country. The fighting in Ethiopian continues to cause huge misery, with many people at facing hunger and famine. I urge their Minister to continue to work towards delivering a ceasefire.

In the House of Commons, it is a busy evening with statements from the Health ministers updating MPs on Omicron, and from the Policing Minister about a new strategy to combat drugs. Its gone 11pm by time the House rises for the evening.

Tuesday 7th December  The morning headlines includes news of more Russian forces on the borders with Ukraine. President Biden is due to speak to President Putin later today, and the leaders of the US, UK, France, Germany and Italy have all met to agree a common statement. An MP asks for an Urgent Question to be raised in the House of Commons to update members on the issue. As “duty minister” I find myself at the dispatch box answering the questions from MPs and repeat the agreed statement from our allied leaders. Any incursion by Russian into Ukraine would be a strategic mistake, it would lead to massive economic and diplomatic consequences for Russia, including sanctions.

I meet with the Prime Ministers envoy for girl’s education, the UK is leading the global effort to ensure that all girls get access to 12 years of quality education. This is vital to boost economic development in poorer countries and enable them to become more self-sufficient, making the world a more stable place for all.

In the House of Commons MPs are debating the amendments on the Nationality and Borders Bill. This will lead to a fairer and more firm immigration policy, supporting legal migrants but with stronger and faster action taken against illegal immigration.

Wednesday 8th December  I join the audience to listen to the Foreign Secretary give a speech about our foreign policy. A clear vision that we in the UK must stand with friends and allies against malign actors and building partnerships for freedom and liberty across the world.

The mood is sombre at PMQs with discussions of whether rules were broken by officials holding Christmas parties last year. This is being investigated and I hope that the investigation happens rapidly. It is important that those in leadership roles follow the rules that are set.

Online I meet with the Tanzanian Foreign Minister, and Ugandan Finance Minister whom I was meant to be meeting in person this week, and have discussions with the Head of the World Bank. We complete the debates on the Nationality and Borders Bill and it passes through the House of Commons.

Thursday 9th December  The Bill is passed so there is no urgent business in the House of Commons, with my diary cleared because of the cancelled travel I head up to North Shropshire to help in the by-election. I always find its interesting to knock on doors during by-elections as voters will tell you what is on their minds. On the doorstep I have long conversations about local services, NHS investment, concerns about Omicron and concerns about politics. From the back of the car I dial into conference calls, it is amazing how much our use of technology has improved the ability to work remotely.

Friday 10th December My Chelmsford day starts with a helpful meeting with members of the Chelmsford Hindu Society who have family and friends in Bangladesh. They are concerned about human rights abuses and I promise to write to the UK minister responsible for the relationship with Bangladesh.

I meet with the local NHS to discuss the situation at Wood Street Surgery. The main practice at Rivermead Gate wants to close Wood Street permanently but the NHS has said this should not happen. This will be a relief to local residents who have struggled to get across Chelmsford to Rivermead Gate. A building surveyor is going to assess the state of the property and look at what works would need to be done for the surgery to re-open, at least until a new, larger and more modern health centre is opened in west Chelmsford in the years ahead.

We also discuss the booster jab programme. A mega weekend of vaccinations is being planned at the racecourse and County Hall is soon to start operating a vaccination centre.

I join a helpful meeting of the Essex County Cricket Board. An independent investigation of allegations of racial abuse has been set up. The meeting also covers many other issues such as player signings, plans to improve the ground and financing.