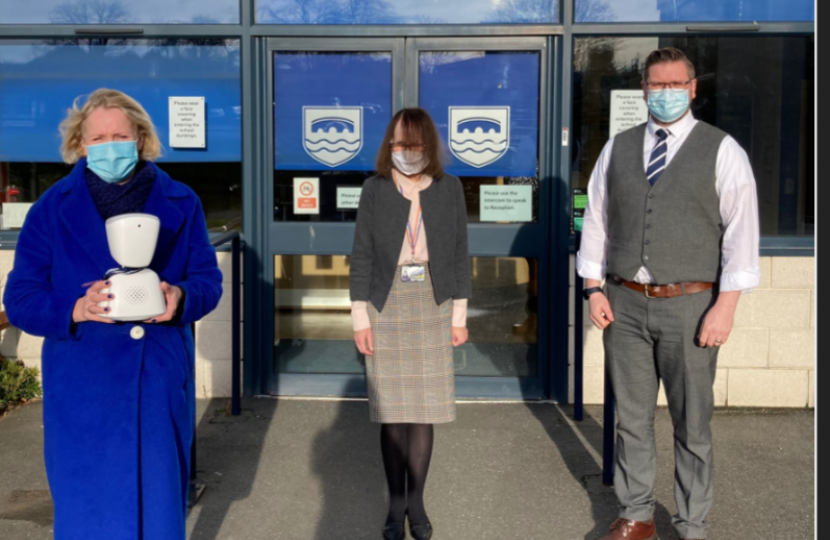 Wednesday 5th January  MPs return to Westminster after the Christmas break. The streets are empty of traffic as many people are working from home, but there is a huge sense of relief that we are not in another full lockdown and that people have been able to catch up with family and friends over the holiday season.

My own “break” has involved a lot of reading. Just before Christmas there was a reshuffle of responsibilities in the Foreign, Commonwealth and Development Office as responsibilities for the ongoing negotiations with the EU have come into the department. As a result, my own brief has now been expanded to cover South America and the Caribbean as well as Africa. This also gives me oversight of our relationships with small island states, which is so important for protecting the world’s oceans. I have much learning to do!

In the House of Common’s second debating chamber, Westminster Hall, the new year starts with a debate on protecting the Amazon. As the Government Minister I respond to the debate, drawing together the comments made by colleagues and laying out the UK’s actions and priorities. The Amazon is vital to the environment of the entire planet.

There is good news. At the COP 26 conference in Glasgow we saw countries across the world come together to promise to tackle deforestation, backed with billions of funding from governments and with the potential to unlock trillions of investment from private sources. Deforestation is sometimes used to produce goods such as cocoa, soy, palm oil and beef. The UK is also working with companies to ensure that consumer products do not contain commodities sourced from areas that have been deforested. Our priority is now to work to turn the promises made at COP into reality.

The Commons is packed for Prime Ministers Questions, where the mood is buoyant. MPs are concerned about the rising of global energy prices and the impact that this will have on household finances. The Government is already doing a huge amount to support households on the lowest incomes. The Prime Minister makes a statement on the response to Omicron, the good news is that it appears to cause a less severe illness and many millions of people have taken the protection of the vaccination. Whilst the NHS is under great pressure, we also know that lockdowns can result in increased mental health concerns as well as impacting lives and livelihoods. The Education Secretary explains the strategy on keeping schools open. It is late in the evening when the Commons rises for the day.

Thursday 6th January  I hop on an early train to Southend to meet Anna Firth who is the candidate for the upcoming by-election which is taking place after the dreadful murder of Sir David Amess. Anna was born in Leigh-on-Sea and is keen to make sure Sir David’s legacy is protected. Southend has now become a city and she is interested to hear what city status meant for Chelmsford and how to create new opportunities for Southend. I talk to her about the businesses that came to Chelmsford, like John Lewis and others and I join her on her first day knocking on doors to meet residents. The sun is shining, the mood is warm.

Back in the Foreign Office I have meetings with our Ambassador for Ethiopia about the hopes for peace talks and catch up with officials on parts of my new brief.

Friday 7th January  In Chelmsford I head over to Moulsham High School to find out how the start of term has been going. The Head and Deputy Head are full of positive news. They explain how happy students are to be back at school, good progress has been made on catching up with missed education and the Year 11 students did really well in mock GCSEs before Christmas. They introduce me to one of the school’s 10 “mini robots”. These brilliant devices mean that students who can’t be in the classroom can take part in the lesson. The robot is placed at the front of the lesson. The student can use controls to spin the robot’s camera so that they can see all that is going on, they can flash a light if they want to ask a question or take part in a discussion, they can flash a light to “put their hand up”.   This clever technology has been extremely helpful for students with mental health issues or needing medical treatments.

I drop into Whitley House GP Surgery where the GPs have just finished their surgery. I am keen to hear from the front line what the situation is. They are working extremely hard. Before Covid the surgery rarely received over 500 calls a day. Now it is often over 500 sometimes even 600. One GP tells me that his contracted hours are from 8am to 6.30pm but he is regularly working much later into the evening.

The pressure of the pandemic on hospitals has led to long delays for non-urgent hospital treatments, this means that many of the patients that the GPs are caring for have much more complex problems than pre-pandemic. It is also difficult to get referrals for treatments like physiotherapy and audiology appointments as clinical staff have been diverted to work on vaccinations.

On the positive side they are pleased with how the vaccination programme has been going, we discussed the important work they are doing to encourage those who have not yet had a vaccination to come forward. They tell me they also have some recently qualified GPs who would be keen to stay in the Chelmsford area, which is encouraging. We discuss longer term plans to improve health services in Chelmsford. I am impressed by their massive dedication to their patients.