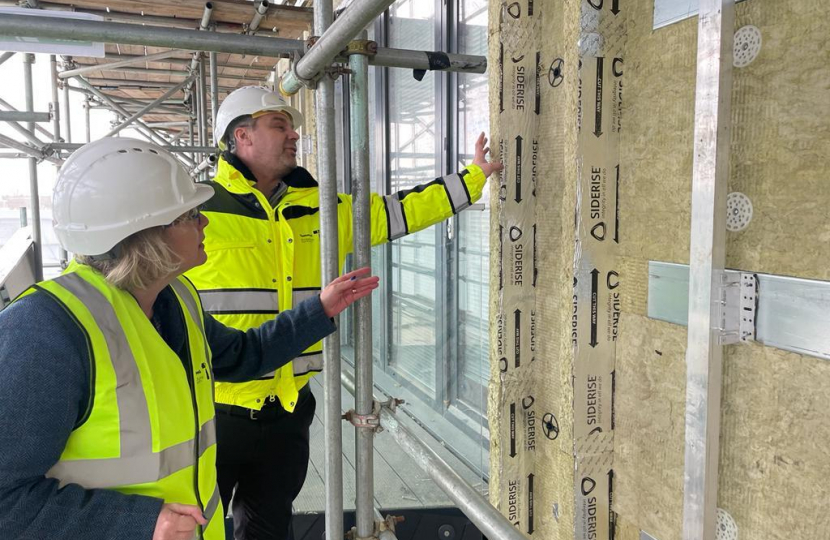 Monday 14th February   Its half term and Parliament is in recess, so a good chance to catch up with Chelmsford issues.  I met up with First Bus Essex to discuss the situation on Chelmsford buses. Readers may know that I was very concerned about our bus service even before the pandemic and have long wanted a more reliable and affordable bus service. During the pandemic the government has put extra funding into bus companies to help them with lost revenue.

Passenger numbers remain at about 2/3 of pre-pandemic levels.  Last Autumn, they did have some difficulties as many bus drivers left to retrain as HGV drivers.  But they are now recruiting and are training on average 6 new drivers every week.  This should improve the bus service, which is currently running at about 90% of the normal timetable, by the end of March. Please use the First Bus App, which will tell what buses are running on any given day.  I am also concerned that fares have increased, but if you use their Tap & Cap service it means that that price of multiple journeys is capped.

Tuesday 15th  February  I headed north to Edinburgh getting ahead of storm Dudley.  The Foreign Commonwealth and Development Office have nearly 1,000 people based in Scotland, including our global hub for girl’s education and supporting women and girls across the world.  After many months of online meetings I am looking forward to meeting some of the team face to face.

Wednesday 16th February  An early but exciting start to the day.   I meet the only living family of the computer coding legend, Alan Turing.   His great nephew, James, and nephew Dermot have set up a charity which takes old computers, refurbishes them and sets up computer labs in Malawi.  Malawi is one of the poorest countries in the world and the charity’s work has helped many thousands of children to learn.   This has been supported by a grant from the Foreign Officer.   I am so inspired by the energy and commitment of the volunteers.

In East Kilbride outside Glasgow I meet staff at the FCDO, having a good chance to talk to them properly, discussing issues from resolving conflicts, humanitarian aid and research and development.  I dial a Global Disabilities Conference, where I am honoured to be the first key note speaker after the co-host nations and the UN Secretary General.  The UK hosted the first ever Global Disabilities Conference a few years ago, it has motivated action across the world to support people with disabilities and it is good to see this action continuing.

I head south again, it’s a long journey back with many train delays but I avoid the worst of the first storm.

Thursday 17th February  A busy day in Chelmsford starting with an extremely fun visit to St John’s Ambulance service where I met volunteer first responders, volunteer vaccinators and some St John’s Cadets. St Johns Ambulance volunteers are helping the NHS Ambulance Service while continuing to attend local events around Essex. I was fascinated by the bicycle ambulance, as they are able to get to people who need assistance when ambulances cannot get to them – like at the Chelmsford half marathon. St Johns needs more volunteer who are willing to attend events and undertake duties. If you think this could be the perfect voluntary position for you, do go to their website to find out how to become a volunteer.

At the Melbourne Surgery, I met with two of the practice partners and the practice director yesterday to discuss the recent challenges that GP’s have been facing. Pressures continue to be high, especially as our GPs are caring for many more patients waiting for hospital treatments and operations.  They are taking about 20% more appointments than prior to the pandemic and most of these are face to face.

I put on a hard hat and high vis jacket at the top of Chelmsford’s Century Tower, where I see first-hand the fire safety work that is being undertaken on one of our city’s tallest buildings.

The cladding (which in this case is fire proof) has been removed and the old (non-fire proof) insulation is being removed and replaced with non -combustible insulation. Improvements to cavity wall barriers are also being made. The cladding is now being replaced, and the project will be competed within the coming weeks.  This work is being paid for by the Governments building safety fund.  This has been a very stressful time for leaseholders and tenants but I was pleased to see that work is now nearly done.

I spent the later part of the afternoon with Cllr Anthony McQuiggan.  He has personally mapped every street light in Great Baddow and Galleywood, and is working to make sure defects are being mended.   At the Great Baddow community centre he showed me the tennis courts where he has arranged funding for floodlights, and in the Galleywood road he is arranging for a traffic survey because he is campaigning for a new zebra crossing.   In Galleywood, he has arranged for the road at the bus stop to resurfaced so that it no longer forms an extra duck pond, and we discussed flooding issues with local residents.

Friday 18th  February  The second storm hits, and I move my constituency surgery to take place on line rather than face to face.  Unfortunately, I needed to postpone other meetings due to the weather and I hear reports of storm damage with trees and walls down across the city - but at least everyone in Chelmsford was safe.