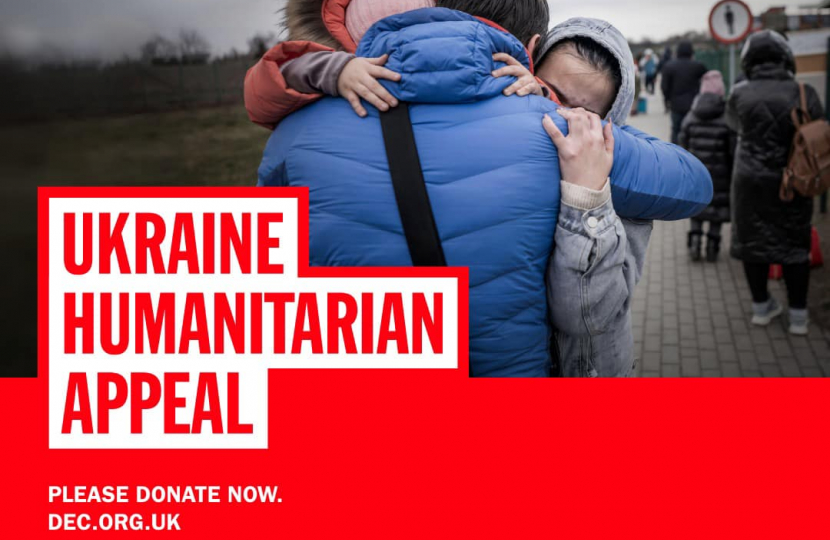 Monday 28 February   The war in Ukraine is causing untold horror on civilians especially women, children and the vulnerable.  It is vital that the international community stands together to condemn this unprovoked attack by Russia and defends sovereignty and the rule of law.   A key moment this week will be when the UN General Assembly votes on Wednesday afternoon.  I spend much of the day making calls to foreign ministers across the world encouraging support for the UN resolution.

In the House of Commons I sit beside the Foreign Secretary as she makes a statement updating the house on the actions the UK is taking and she takes questions from MPs.   As readers know I usually wear blue.  Today I have tied a yellow kerchief around my neck as blue and yellow are the national colours of Ukraine.  It’s a tiny act on my behalf but I know the brave people of Ukraine value every bit of support that is given. I fear it may be a long time before they are safe.

There are many debates and statement in the House and it is well after midnight when the final vote is held.

Tuesday 1 March   Another day of non-stop calls to ministers across the world.  The strength of feeling of support for the people of Ukraine is massive, from all parts of the world.  I also lead a debate in Westminster Hall on International Mother Language day, another chance to speak about support for the people of Ukraine.   Russian is spoken widely in Ukraine, many households speak both Russian and Ukrainian.

Wednesday 2 March  I start the day at a briefing for MPs about Ukraine.  These are now being held daily.  MPs are told that we expect over 120 votes for the resolution at the UN this afternoon.  That would be massive compared to previous votes, nevertheless I go back to the Foreign Office and continue calling other countries.   At Prime Ministers Questions the speaker starts the session by welcoming the Ukraininan ambassador who is watching in the gallery.   MPs all across the chamber rise to their feet and applaud.  The clapping continues and continues.  It is deeply moving as MPs are not usually allowed to clap in the chamber.

I am in Westminster Hall responding to a debate about democracy and the vital work that the UK’s Westminster Foundation for Democracy does across the world when the result of the UN vote are passed to me.  Over 140 countries have voted for the resolution.  I return to the House of Commons to support my foreign office minister colleague as she speaks for the government in another debate about the situation in Ukraine.

Across the UK people want to help, a massive appeal by the Disasters Emergency Committee has been launched and the government is giving over £200 million of humanitarian aid.  There is concern that some of the supply lines into Poland and other neighbouring countries could become blocked by the many informal donations of goods that are springing up.  If you do want to donate to the people of Ukraine and refugees then please don’t buy goods locally in the UK for them to be transported.  Instead please do donate the funds to the appeal, so that the humanitarian organisations can buy what is needed centrally and get the goods to where they are most needed.

Thursday 3 March  More calls to foreign ministers across the world, a helpful meeting with the World Health Organisation on getting Covid vaccines across Africa and a sombre meeting with those working to support women and girls in conflict zones.  Sadly we know that cases of domestic abuse and sexual violence will be rising.  I host a meeting of the ambassadors and high commissioners from Commonwealth countries – all of whom voted for the resolution condemning the Russian assault.   We discuss trade and investment opportunities as well as the work that is being done to deliver the promises made on climate change at COP26.

Friday 4 March  I spend much of my Chelmsford day helping local constituents who have been affected by the Ukrainian situation, but also have a fascinating catch-up with the management team at Teledyne e2v – did you know 90% of the worlds cancer scanners have components that are made in Chelmsford.  I pop into a virtual meeting of the One Chelmsford partnership that brings together police, health, council and other services to focus on the needs in Chelmsford.

At Trinity Road primary school I meet the awesome therapists and teaching assistants that support young children with speech and language challenges.   Trinity Road is a specialist in this area and offer places to up to twenty children from all across Essex who come to the school for up to a year of intense support.  This can be life changing for the children they work with.

At the end of the working week, I go to evensong at Chelmsford Cathedral.  It is a beautiful service of prayers for peace.  I know many people are very worried at the moment, if you do need a place to pray, think or meditate do remember that our cathedral and places of worship are open for you.

I spend much of the weekend working but have a happy couple of hours delivering newsletter updates in Chelmsford and speaking with residents.