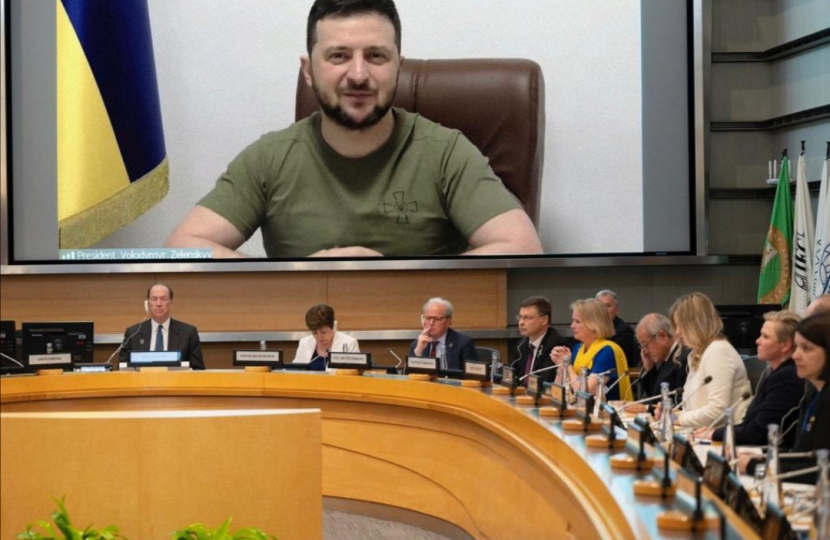 Tuesday 19 April  MPs returned to Westminster following the Easter recess. I attended meetings in the Foreign Office including with the Foreign Minister from Jamacia who was visiting London, and online with the Foreign Minister from Barbados. Small island developing states like these two Commonwealth friends often face extra vulnerabilities especially due to climate change, but they also face great barriers and disproportionate bureaucracy when trying to access finance for critical infrastructure and other projects. The UK has been helping to try to get these barriers reduced and I am raising this when I am in Washington for the World Bank meetings this week. In the House of Commons, I listened closely to the Prime Ministers statement regarding recent events, including his recent fine. I write back to the constituents who have contacted me about this.

Wednesday 20 April  Up early for the flight to Washington DC. The Governors from the World Bank meet each Spring and Autumn to discuss the situation across the globe and agree the Bank’s priorities at a meeting of its Development Committee. Ministers from many different countries attend the meetings so it is a good chance to catch up with lots of partner countries. However, at the committee meeting itself only a limited number of countries get the chance to speak. As the UK is one of the 6 largest shareholders in the Bank I am able to speak on behalf of the UK, but others need to speak on behalf of different country groupings. This means that I will be one of the very few people at the meeting who can react to what others are saying, rather than read a pre-agreed statement.

A key priority will be getting World Bank and partner support for Ukraine as well as support for the worlds poorest countries who are suffering from the high food, fertiliser and fuel prices caused by Russia’s invasion. However, we must also not forget other issues such as tackling climate change, other conflict zones and poverty.

On arrival in DC, I meet with the Finance Minister from Jamacia to discuss small island states, and then with the Finance Minister from Zambia. It is forecast that the current economic situation may push around 60% of Sub Saharan countries into unsustainable debt. Zambia is one of three countries that is already trying to renegotiate its debts under the newly agreed “Common Framework”. I am concerned about the delays to the negotiations as the Chinese have not yet agreed to enter the negotiations. We discuss ways forward and I promise to raise this at the Development committee.

Thursday 21 April  Before heading off to meetings in Washington I join a conference for the “Education Cannot Wait” organisation. This helps to fund education for children in conflict zones, refugee sites and in areas which have been affected by natural disasters. The UK is one of the biggest donors.

I meet with my US counterparts to discuss issues in Latin America and Africa. With the Ethiopian minster I discuss the progress towards peace. Whilst a humanitarian cease fire has been announced in the North, aid is still not flowing regularly leaving many, many people in dire shortage of food, fuel and other urgent needs – as well as the seeds that are needed to plant crops. I press for the government to do all they can to get the aid to those that need it. We also discuss the dreadful drought that is affecting millions of people in Southern Ethiopia, Somalia and Northern Kenya.

A group of countries that represent “Friends of Ukraine” meet. We are joined in the room by the Ukrainian Prime Minister and Finance Minister, and on the screens by President Zelensky himself. The best way to help get humanitarian assistance to the people in Ukraine is to keep the government systems for education, health and welfare operating, but they do need financial assistance. The World Bank has agreed $3 billion in assistance, and I tell the room that the UK is increasing its offer of assistance to the Ukrainian government to nearly $1 Billion. Around the room offers adding up to many billions are also pledged. Bilateral meetings continue into the evening.

Friday 22 April  The Development Committee meets early in the morning, starting at 7.30 am. This is so that people following the meeting from other time zones have the best possible chance of listening to the proceedings. The Bank has agreed an unprecedented package of $170 billion to help the poorest countries cope with the impact of rising food and fuel prices. It is an urgent need as 400 million people in the world usually rely on grain from Ukraine for their food. I am proud to have helped get this package through. Most of the speakers are hugely supportive of Ukraine, when the Russian delegate speaks I and many others leave the room.

I spend the afternoon in many more meetings, including joining the COP President Alok Sharma in meetings to discuss progress on tackling climate change. Countries across the world made many promises when they met in Glasgow. As COP President we want to make sure that these promises are turned into action. It is late at night when I get to the airport for the plane home.

Protecting Our Environment for Future Generations

I have led campaigns locally, nationally and internationally for over a decade to strengthen environmental laws and to stop plastic pollution.  I am a founder member of the Conservative Environment Network.