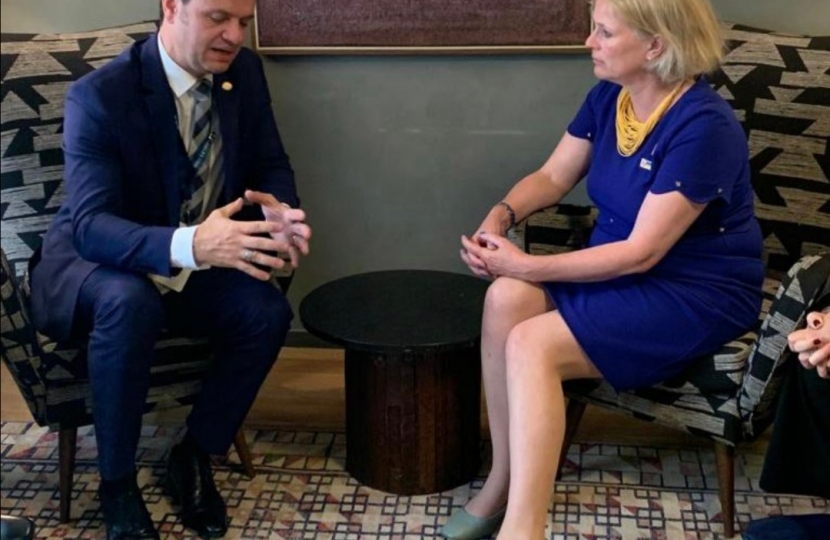 Monday 6th June 2022 There has been the most awful attack on a church in Nigeria. Around fifty people have been shot dead during an service celebrating Pentecost. On my way into London I hear that an urgent question has been tabled in the House of Commons by the MP for Congleton Fiona Bruce. Fiona is a passionate believer in the freedom of religion and acts as and envoy to the Prime Ministers, standing up for those who are persecuted for their religion or beliefs across the world. I will be the Minister answering her question,

When one MP asks an Urgent Question in the House, any other colleagues are also allowed to then follow on with other questions on the same topic. This usually means around an hour of questions, which is always daunting for the Minister. However, this is an important issue. Nigeria is a very significant country, the largest by population and the largest economy on the continent. We have close ties between our countries and the Nigerian disaspora living in the UK is the largest from any African country.

There are many wonderful things happening in Nigeria but the increasing violence is a huge concern. The causes of the violence are incredibly complex, in some parts of the country there is banditary and even terrorist groups, in other parts the struggle over land and grazing for livestock leads to attacks between herders and grazers, sometimes there may be a religious link. This attack however has happened in a part of the country which is usually very stable.

Increased instability in Nigeria would have huge repercussions around the region and lead to further migratory pressures too. Leaders of all faiths are calling for calm and hoping this does not escalate even further. From the dispatch box in the House of Commons I condemn the attack, urge that those responsible be held to account, call for calm and update colleagues on the work we have been doing to try to address some of the root causes.

In the evening we have the vote of confidence in the Prime Minister. Tensions are very high and it is an extremely divisive time. It is clear that the press want to whip up even more division and hate. Following recent threats to my own security I am advised not to comment in any way about the vote.

Tuesday 7th June 2022 I have a fascinating meeting with the Archbishop of Canterbury. He is going to be visiting some very challenged African countries soon, working with other Christian leaders on a mission to call for peace. We share thoughts, I update him on the work we are doing through our embassies and high commissions and he gives me feedback from the huge network of Christian communities. We discuss further ways to tackle corruption, the impact of climate change and some of the positives projects we have been doing especially to help women and girls. The rest of the day is spent in internal meetings before heading off to the airport for a flight to Los Angeles.

Wednesday, Thursday, Friday 8, 9, 10th June 2022 The Summit of the Americas brings together leaders from North and South America and the Caribbean. The Summits are quite rare, the first one happened in 1994 and this only the ninth time it has occurred. I have been invited by the USA to represent the United Kingdom as an observer country.

The Opening Ceremony is full of glitz and glamour with acts from across the hemisphere. But there are serious moments too, including a speech from President Biden calling for the countries to come together as neighbours to work for peace, democracy and supporting development as well as tackling some of their big issues like the flows of migration.

Over the days I meet with leaders and ministers from over twenty different countries, discussing joint priorities like building trade and security, tackling climate change and the rising costs of living. Many of these countries believe passionately in sovereignty and the rule of law, and have joined the UK in international votes to condemn the Russian attack on Ukraine. Many of the leaders ask after our prime minister, he is very respected internationally especially for the work the UK did under Boris Johnson’s leadership to get global agreement on climate change at COP 26.

I also meet with the Brazilian Minister for Justice to discuss the disappearance of the British citizen Dom Phillips. Dom is an environmental journalist known across the world for his work. He, and his Brazilian travelling partner have gone missing in an extremely remote part of the Amazon rainforest. The Minister tells me how they are searching for them using planes, boats and by land and promises to keep searching.

I also meet the Californian senator who is leading new legislation to tackle the use of un-recyclable plastic. He asks about the work that the UK has done for example our bans on plastic straws and stirrers and encouraging the use of refillable or reusable plastics. I learn from him about the devastating wildfires that have been burning in recent years. The trade links between the UK and California are huge, especially in the creative sector but also in areas like advanced manufacturing. It’s good to meet a US politician who is passionate about the environment.