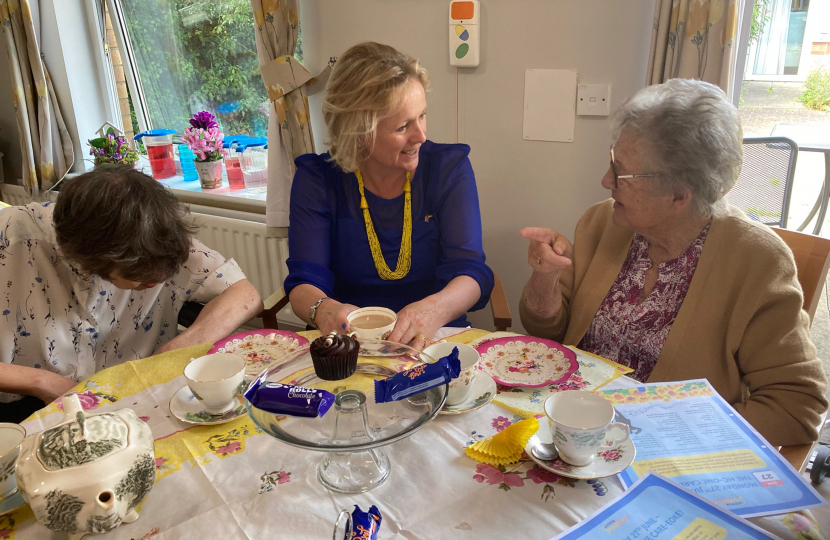 Monday 27 June 2022   It's a busy day for the foreign office as MPs are due to debate the proposed changes to the Northern Ireland Protocol this evening.   The situation in Northern Ireland is extremely worrying.   The protocol was negotiated with the EU as part of the Brexit talks.

In its opening paragraphs it promises to protect the Belfast Good Friday Agreement, which was so fundamental to bringing peace in Northern Ireland.  That Agreement established the power sharing system that enables the Northern Ireland Assembly to function.

However, the protocol has failed to do this.  Costly bureaucracy on East / West trade of goods flowing between Great Britain and Northern Ireland has led to many companies failing, and many goods that are usually available in the rest of the UK are not now available in Northern Ireland. Community tensions are escalating, and the Assembly has not been able to function, meaning important decisions on budgets for health and other services have not been able to be taken.  Changes are necessary.

The UK wants to renegotiate the protocol with the EU, but the EU has refused to discuss this, despite the fact that the protocol itself allows for changes to be made and the EU often renegotiates treaties.   The UK's legal advice says that in these circumstances the UK would be acting lawfully to make changes to the protocol.

In order to protect the EU’s own Single Market, the proposed changes include introducing “Red” and “Green” lanes for goods travelling from the rest of the UK into Northern Ireland.  Goods that are destined for the Republic of Ireland would go through the Red Lane and need to comply with all EU rules and checks, whereas goods only going to Northern Ireland would be able to go through the Green Lane, with less bureaucracy.  There would be punitive fines for anyone moving goods from Northern Ireland into the Republic if they had been brought in via the Green Lane.

I join the Foreign Secretary in the House of Commons at the start of the debate and listen closely to comments from colleagues.   When it comes to the vote the motion is passed by 295 votes to 211, a very substantial majority with no Conservative MPs voting against the motion.

Tuesday 28 June 2022   Across the world many people are persecuted for their religion.  The UK is a champion of freedom of religion or belief.  We are about to host a massive conference bringing together people from over 60 different countries including ministers and representatives from across society who work to bring tolerance and understanding.  I join MPs in the House of Common’s second debating chamber of Westminster Hall to discuss the situation and outline some of what we hope the conference may achieve.

Select Committees in Parliament play an important role in holding Government to account.   The members are often expert on their subject and are known to ask ministers detailed and testing questions.   I attend the International Development Select Committee to discuss the work that has been done to reduce Sexual Exploitation and Abuse in humanitarian situations.   Back in 2018 the news broke of some horrific examples of situations where vulnerable disaster survivors had been sexually exploited by aid workers.   Since then, the UK has led many different actions to reduce this risk, including establishing an international reporting mechanism.   This has helped prevent over 100 individuals from taking up roles in humanitarian situations.

I hold many internal meetings and meet the Minister for Energy from Mozambique, a country that plays an important part in providing energy.  I spend the evening meeting designers from across Africa at the opening of an exhibition of African Fashion at the Victoria and Albert Museum.  If you are interested in fashion, then do go to this.  It is fabulous!

Wednesday 29 June 2022  Readers of this column will know that I rarely take time off, but today is different.   I attend the university graduation of my youngest child in Cambridge.  After all that has been thrown at our students during the pandemic, I could not be happier for him and his peers as they complete their degrees.  I return to Westminster in the evening for votes.

Thursday 30 June 2022  A packed day, meeting ministers from Zimbabwe, answering a debate in the House of Commons on the talks to try to prevent nuclear weapons in Iran, meeting online with the deputy foreign minister from Mexico and an important discussion on further support for those affected by the dreadful drought in the Horn of Africa.

Friday 1st July 2022  In Chelmsford I visit two schools, answering questions from the politics A level students at KEGS and from the year 6 students at Barnes Farm School.  What extremely engaged and thoughtful young people we have in Chelmsford!   I meet with NHS officials to discuss plans to put more GP services in the parts of the city affected by the closure of the Wood Street Surgery and join residents of one of Chelmsford's care homes who are having a happy tea party.

I meet with the district commander of our local police to discus the work they are doing tackle drug dealing and county lines activity locally.  This is a top priority for them and they have made recent arrests.  Thank you to all those that provide intelligence to the police.  The police will always work to protect the confidentiality of those who give this intelligence, by sharing what you see you are helping to protect others.