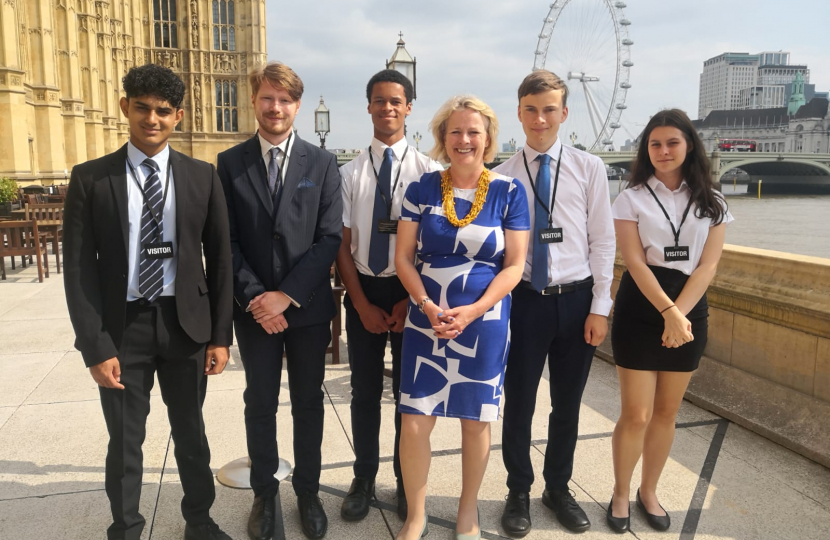 Monday 18 July 2022  It's the last week of the parliamentary term, a heatwave in London, the leadership race is in full swing and a vote of confidence in the government is scheduled for this evening.   It's all go.

I am backing Liz Truss for leader.  I've been working with her in the Foreign Office for the past 9 months and have seen a person who listens carefully, thinks deeply then sets clear priorities and gets things done.

When she came into the Foreign Office last September after the mistakes of Afghanistan, the mood was so low.  It felt like this great organisation had lost confidence in itself.   Liz immediately put it back on its feet, made sure it focused on delivering the COP conference in Glasgow which was so important for the world but also for re-establishing UK leadership on international matters.  She made sure that everyone was ready to act when the next crisis hit, and led the free world in standing up against Russian aggression in Afghanistan, at the same time as dealing with a multitude of other issues.   I believe that to restore trust in politics we need to deliver on the promises we make.  And Liz is someone I have seen deliver.

We know the votes will be tight this week. I join other supporters to go one by one through a list of parliamentary colleagues.   Discussing who is supporting whom, arranging one on one meetings for those that are under decided and make sure that everyone who is backing one of those likely to drop out will get contacted.  I join MPs from all parts of the Parliamentary party at the launch of Liz’s campaign.

In the Foreign Office I catch up on pressing issues and meet online with the head of the National Security Agency from Trinidad and Tobago.  He was meant to visit London but a surge in gang related crime locally has kept him at home.  We discuss the work the UK police has been doing to tackle County Lines gangs and he agrees to bring a team from his country to come and learn what has been working here.  So important to support Commonwealth allies. I attend more leadership hustings.

Back in the House we vote for Leader. Tom Tugendhat drops out of the race, he’s a good friend.  The motion of confidence is carried by a huge majority.

Tuesday 19 July 2022  Goodness it is hot!  Top tip -  I slept with a bottle of iced water beside me, which helped keep the room cool.  Much of the day is spent talking to colleagues about the leadership, but as Minister for Africa I also lead a debate on security in Nigeria.  It such a country of two half’s, on one hand huge poverty and violence but on the other hand brimming with energy and innovation.   In the leadership votes my Essex neighbour Kemi Badenoch falls out.   As a relatively new MP with only 5 years in parliament she has run a very impressive campaign, definately one to watch.  We are down to the last three candidates.

Wednesday 20 July 2022  After a catch up with Liz supporters on the final few votes we need to secure today, I go online to open a huge online call with UK pension funds.  They represent over £400 million of assets and want to invest more in tackling climate change in developing countries. We are joined by experts from as far afield as Indonesia and South Africa, talking through the issues and how the UK Government can help de-risk projects to bring in more private investment.  If we are to beat climate change this is really important.

Five students from Chelmsford have joined for work experience.  I take them on a tour of Parliament, explaining how legislation is debated and agreed.  How the Commons works with the Lords, and most importantly how best not to get lost!

After PMQs, the work experience team join me as I head over to cast my final vote for leader. Introducing them to many MPs including the foreign secretary.  What a day to be in Westminster.   Three of the students are interviewed by BBC Essex, speaking to the press and communicating back is an important part of and MPs work so they are truly getting the real experience.

It is finger biting time when the results are announced.   Liz has made it to the final two.  We are delighted that she will get the change to put her case to the wider membership.   The hard work starts now.

Thursday 21 July 2022  The last day of the Parliament Term.  I work with Foreign Office Officials to go through a number of issues that may come up over the summer, set priorities and strategies.  Clear my Westminster desk and when the house finally adjourns I head off to Chelmsford.   It's my favourite evening of the sporting year, when the England women's team play at our county ground.  The weather is balmy, the mood is joyful and the England ladies keep up their near perfect record of always winning in Chelmsford.

Friday 22 July 2022  In Chelmsford I meet with the managing agents and developers of Kings Tower.  This is one of the last remaining local properties still to carry out fire remedies post Grenfell.   To be fair to the developers the building only has a tiny amount of cladding so is not as high risk as others, but tenants have been waiting so long.   I am pleased to hear that progress is expected even within the next couple of days.   I speak to the chief executive of Chelmsford City Council about plans for spending the £1 million plus funding that Chelmsford is to get from government to help boost prosperity.

The work experience crew are back with me today.  They have a tour and talks at the County Council to learn more about local government, I take them through examples of case work, and in the afternoon they join me delivering leaflets and chatting to residents.

My final meeting before recess is held for the issue that worries me most.   Rains have failed for the fourth season in a row in the Horn of Africa.   It is the worst drought in 40 years.  In Somalia, Ethiopia and Northern Kenya 48 million people are facing severe food insecurity.   The UK has already done a huge amount to alert the world and has committed to spend £156 million in emergency aid.  If Russia keeps to its promise to allow the grain to get out of Ukraine this will help a bit, but the world needs to do more to try to save lives.   I talk with representatives of humanitarian agencies and set in track further plans for next steps.  Even with Parliament on a break, I will continue to focus on priority issues.