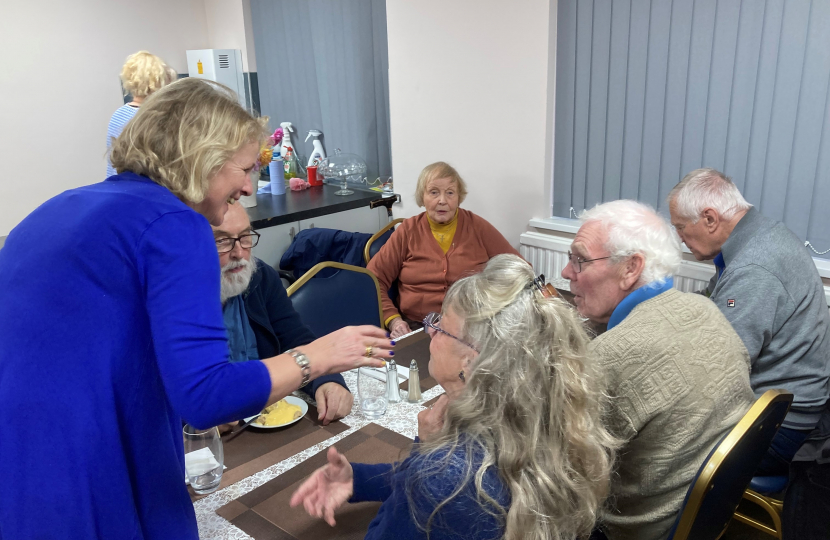 This week started and finished in remembrance. On Monday, on behalf of the people of Chelmsford, I planted a poppy cross of in the Garden of Remembrance in the House of Commons. On Sunday, I joined the people from across Chelmsford to take part in the service of remembrance and the laying of wreaths at our war memorial.  It was particularly moving to see so many young people taking part in the service and parade in Chelmsford.  After the service I met Bobby who has just joined the Sea Cadets and, at the age of 10, was one of the youngest wreath layers.

This year, our thoughts of remembrance are especially poignant as we are also thinking about the men and women of Ukraine who are defending their country so bravely.  It was good to hear the news that the city of Kherson has now returned to Ukrainian hands.  I was also pleased to hear that a peace deal has been secured in Ethiopia, I spent much time working on securing peace there during my time as Minister for Africa.

On the subject of veterans, I would like to offer huge congratulations to Essex County Council on recently receiving an employer Recognition Scheme (ERS) Gold Award from the Ministry of Defence for its support for the armed forces community. This is the highest available accolade in recognition of the ongoing support for serving troops, service families, veterans, and cadets, a wonderful achievement for our County Council.

On Monday, I also took time to have my covid vaccine.  There are still huge pressures on our NHS and worries about the possibility of particularly virulent flu this winter.  If you are eligible for a covid booster or flu jab, please do get it done.   You will be helping to protect others as well as yourself.

Westminster has been full of discussions about the Boundary Review.  Every decade there is an independent review of parliamentary constituency boundaries by the Boundary Commission.  The Commission aims to make sure that each MP across the UK represents roughly the same number of voters.  Due to the growth of Chelmsford, I now represent many more people than the average MP, so the Commission is recommending that Galleywood be moved from the Chelmsford Constituency and be represented by the Member of Parliament for Maldon.  I have greatly enjoyed working with many people in Galleywood and will miss them greatly.

Tuesday brought another emotional service in Chelmsford for the funeral of the mayor of Chelmsford, John Galley.  John was a very kind and thoughtful man who cared deeply for the people of Chelmsford.  The service in the Cathedral was extremely beautiful.  John’s coffin was draped with the mayoral robes, his mayoral staff and chain were carried in a silent procession.  I know everyone would like to thank John for his work as councillor and mayor and will be thinking of his wife and family.  I would like to wish Councillor Sue Dobson the very best as she has now stepped into the role of mayor and will make sure that John’s legacy continues.

In Westminster on Wednesday, I joined MPs in the House of Commons to ask the Prime Minister questions about his recent visit to the COP27 negotiations in Egypt.   The UK COP team had contacted me beforehand.  Apparently, there were concerns from other countries that the UK might roll back on some of the promises we made at COP26 in Glasgow about global investment.  We know that if we don’t help other countries to invest in mitigating and adapting to the impact of climate change there will be even more unsustainable migration, and this will affect us in the UK.  I asked the Prime Minister to confirm that the UK would hold true to our promises.  He gave a very clear confirmation so I hope that having this on the record will help the global negotiations.

I joined other MPs to meet with the Chancellor to discuss his preparations for the Autumn Statement.  It is very clear that he has some extremely difficult decisions to make as it will not be possible to continue spending government funding at the same rate.  The Chancellor is making time to meet many different colleagues from different parts of the United Kingdom before making final decisions.

I joined John Whittingdale,the MP for Maldon to visit a showcase in Parliament of produce from local Essex providers in the Tendring area which covers Harwich, Clacton and the surrounding areas This had been organised by Giles Watling MP and Sir Bernard Jenkin MP.   John and I are interested in organising a similar event in the future for Chelmsford and Maldon producers.  Do let me know if you are local producer and might like to take part.

Another ceremony that I took part in this week was the swearing in of new Privy Councillors.  It was an enormous honour to have been appointed to the Privy Council by Her Late Majesty Queen Elizabeth II.  These were one of the last appointments she made before her death.   I joined six other new appointees to take my oath to King Charles III.  The Privy Council is the formal body of advisors to the sovereign.

In Chelmsford, I visited Larkrise Primary School to meet the new headteacher.  She is very keen to make improvements to the play area for reception aged children, especially as it often floods when rain comes.  I joined elderly residents for lunch at the excellent Age Concern centre in the city centre and had a warm welcome at the open days for both the Chelmsford Mosque and the Royal Air Force Association, just off Moulsham Street.  In New London Road, the coaches from Reed in Partnership told me about the work they are doing support many individuals to find employment opportunities.  This is one of the Government funded programmes to help those who have faced the hardest challenges to build the skills and confidence they need in order to find work that suits them best.

I also met scientists and engineers at BAE Systems in Great Baddow.  They are doing some very exciting work on a new generation of low earth orbital satellites which will enhance the ability to understand and care for our planet better.   It is very exciting to know that these innovations are being invented in Chelmsford. The company offers opportunities for apprenticeships and sponsors apprentices through university.  If you are interested in going to university to study electronics, maths, engineering or science subjects and would like to learn more about how the scheme helps you to earn whilst you learn then do look at their website for information.

As ever, if you need advice or help with an issue, please do email me at vicky.ford.mp@parliament.uk

In my constituency, there are a wide range of charities and community action groups that are absolutely committed to reducing loneliness.