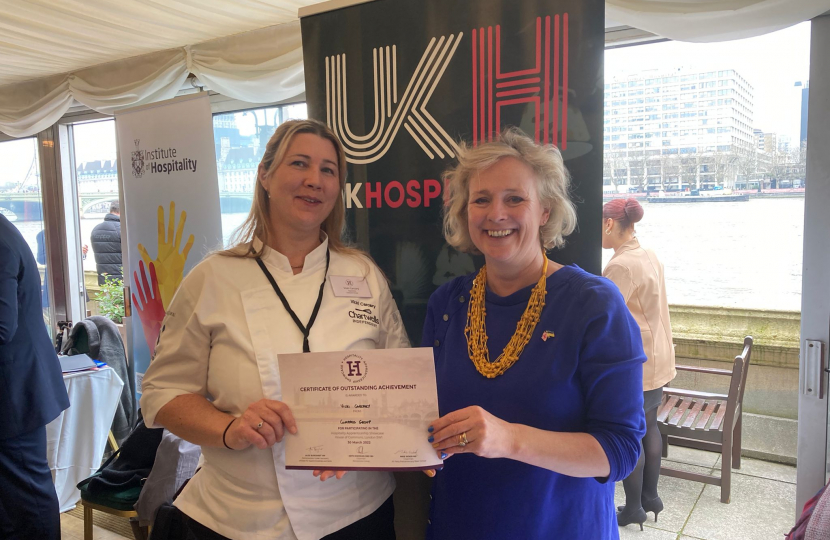 Monday 28 March  A busy start to the week.  In the Foreign Office I meet the head of the Gates Foundation a major funder of projects to improve health and tackle disease around the world.  The boss of Trademark East Africa tells me about the work they have been doing to reduce the costs of trade which is helping to boost jobs in both the UK and many African nations.  A leading bank from Kenya talks to me about trade and investment opportunities.  The ambassador from Panama discusses the ships that are stranded off the coast of Ukraine.

I join the Foreign Secretary in the House of Commons as she gives an update to MPs about the situation in Ukraine.  Over a dinner, interspersed with votes, I hear from a British company that is hoping to build a massive wind energy project in Niger, bringing clean electricity to one of the worlds most deprived countries.

Tuesday 29 March An important day for trade between the UK and many African nations as I join the Trade Secretary to welcome the Secretary General of the African Continental Free Trade Area.   This is the world’s largest free trade area initiative.  We were the first country outside of Africa to sign an understanding with them and have announced a new program to help unblock trade barriers.

I meet the head of the UK’s Charity Commission.  There are very worrying stories of people traffickers and abusers trying to take advantage of refugees fleeing Ukraine.   We discuss sending an alert to all UK charities operating in the area so that they are aware of the serious safeguarding concerns.

Wednesday 30 March  In the House of Commons second chamber, Westminster Hall, I announce that UK servicing judges will no longer serve on the courts in Hong Kong.    Ever since the 1990s UK judges have helped support the legal system in Hong Kong.  In recent years the laws imposed by China have become increasing draconian, stifling free speech and clamping down on opposition voices.  MPs from all parties and from all parts of the UK give their support for the statement.

At lunchtime, I catch up with Chelmsford resident Vicki Carcary, Chelmsford resident, at an UK Hospitality event for Apprentices. Vicki has been awarded a Certificate of Outstanding Achievement and is now qualified as a Chef de Partie working at New Hall School.   Vicki told me that she is also a major supporter of Women In Food and that she also greatly enjoys being a Scout leader in Chelmsford.

Across the world the UK has been supporting MPs and members of the House of Lords to become trade envoys.  They are helping to unlock investment opportunities for UK businesses and job opportunities.  I meet with one of our most active trade envoys to discuss plans for the months ahead.

MPs vote until late into the evening on new measures to support the NHS and social care.

Thursday 31 March   I race into House of Commons where the speaker has agreed that an urgent question should be asked about rape as a weapon of war in Ukraine.   There are some truly dreadful stories.  I update MPs on what the UK is doing to tackle war crimes, we have led the way to launch the largest ever call for an investigation by the International Criminal Court.  It is so important that victims are supported, that evidence is gathered and that perpetrators of war crimes know that they will be held to account.

I meet with leaders from UNICEF to discuss vaccination programs in Africa, it is so important to keep vaccinations going out across the world. I take part in an international conference on providing education to refugee children, the UK is one of the leading donors to this work.  I meet global leaders on efforts to reduce the recruitment of child soldiers.  I speak at the global funding conference to raise humanitarian aid for Afghanistan with a plea that the girls should be permitted to attend school.

Friday 1st April  My Chelmsford day starts with a constituency surgery, please do call or email my office if you need a surgery appointment.   I was also due to meet with the Police Federation but a last minute issue means we have to postpone so I use the time to pop into Chelmsford Market and visit some of the shops in the High Street before meeting with the managing agents of one of Chelmsford’s tallest buildings to discuss cladding issues.

The new term will bring a new chance to improve the situation.  Teachers have been training on a new scheme to encourage walking, cycling and scooting to school.  Please parents either walk, cycle or scoot or use the car parking that is offered at Asda and bring your children in through the back gate.